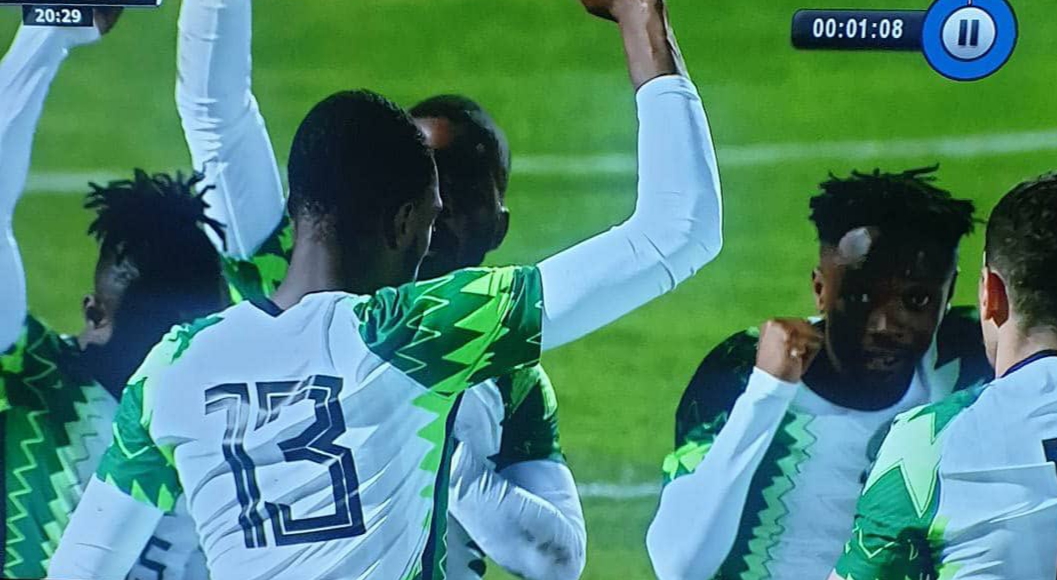 Kelechi Iheanacho scored a goal for the Super Eagles in their 1-1 draw with the Carthage Eagles of Tunisia in a friendly game in Austria.

The Leicester City forward could have bagged a brace in the encounter, but blew the chance to get a second when he missed a penalty.

The game, played inside the Jacques Lemans Arena in Austria, is the second game in four days for both teams respectively.

Nigeria had fallen to a 1-0 defeat against Algeria last Friday while Tunisia defeated Sudan 3-0 on same day.

Gernot Rohr’s men have now failed to clinch a win since the start of 2020, as they prepare to face Sierra Leone in the Africa Cup of Nations (AFCON) qualifiers next month.

Iheanacho, who, unlike the gane against Algeria, made the starting lineup, opened the scoring in the 20th minute following a throw-in from Zaidu Sanusi which allowed Ahmed Musa to find Iheanacho who then fired into the top corner.

After the goal, the team celebrated by kneeling and raising their fists in the air, in support of the ongoing #EndSARS protests across towns in Nigeria.

The Eagles continued to dominate until the 27th minute, when Musa was brought down in the box and the refree booked the goalkeeper and points to the penalty spot.

Iheanacho stuttered and sent a tame effort into the gloves of Ben Mustapha, before Tunisia rallied back to take advantage of a defensive error and equalised just before halftime via Mohammed Drager.

Genk striker, Cyriel Dessers and CSKA Moscow winger, Chidera Ejuke made their debuts for the Eagles coming on in the second half.

Tunisia have now failed to beat Nigeria since the 2004 Africa Cup of Nations.