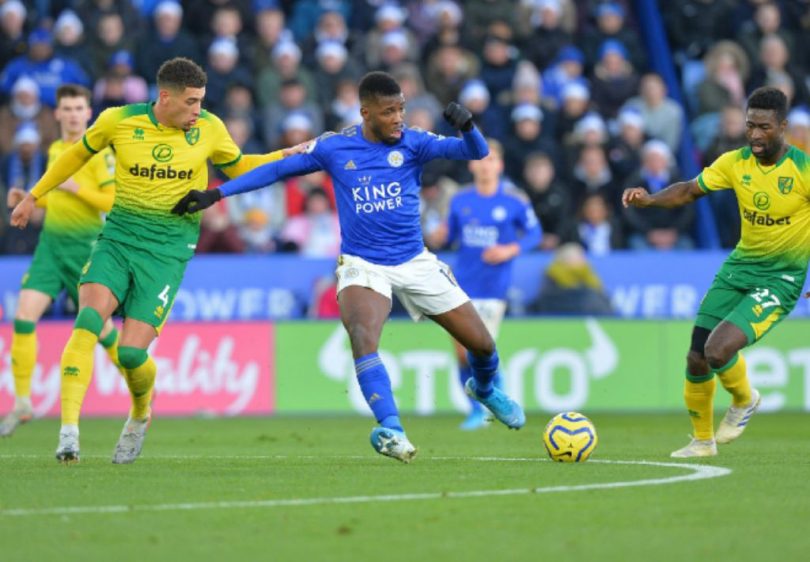 Super Eagles forward, Kelechi Iheanacho made the starting lineup for Leicester City in the Premier League on Saturday, but was replaced in the 39th minute for an unsportsmanlike behaviour.

His compatriot, Wilfred Ndidi was also in action and helped his side pick a point against Norwich City.

A Norwich player kicked the ball out of play in the 35th minute as their player Emiliano Buendia needed treatment.

On resumption, the ball was thrown to Iheanacho who instead of giving the ball back to a Norwich City player , ran towards the opponentss goal before he was brought down close to the edge of the box, resulting in a free-kick.

In the 39th minute, manager Brendan Rodgers replaced the Nigerian forward, who was making his 100th Premier League appearance, with Demarai Gray.

In the match, played at the King Power Stadium, the Foxes were dealt a huge blow in the title race as they were held to a draw by a battling Norwich.

Leicester, who remain second on the table, had their eight-game winning run ended, and now lie 10 points behind league leaders Liverpool, following their 2-0 win over Watford earlier on Saturday.

Teemu Pukki gave Norwich the lead in the 26th minute when he slotted home after being sent through by Emiliano Buendia before Jamie Vardy’s header was turned into the net by Norwich keeper Tim Krul on the 38th minute.

In the other Premier League matches played concurrently, Burnley beat Newcastle 1-0, Chelsea were defeated at home by Bournemouth, while Sheffield United saw off Aston Villa 2-0.