IHEDIOHA: Secondus, Abaribe, others beg US, UK to come save Nigeria | Ripples Nigeria 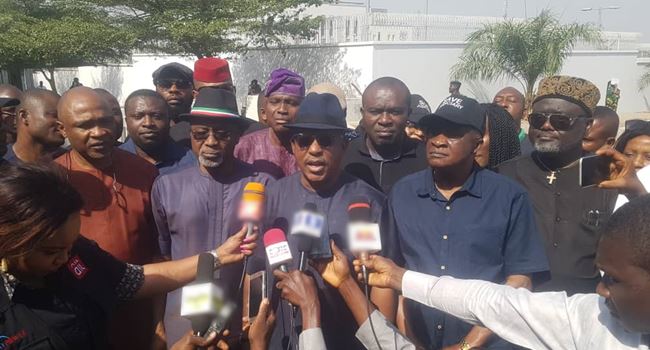 The National Chairman of the Peoples Democratic Party (PDP), Uche Secondus and the Minority Leader of the Senate, Senator Enyinnaya Abaribe on Friday led the party’s protest to the United States (US) embassy and the United Kingdom (UK) High Commission in Abuja.

The visit was in furtherance of the party’s protest over the recent ruling of the Supreme Court that sacked its member, Emeka Ihedioha, as the governor of Imo State.

A seven-man panel of the Supreme Court led by the Chief Justice of Nigeria (CJN), Tanko Muhammad sacked Emeka Ihedioha and declared Hope Uzodinma of the All Progressives Congress (APC) as the new governor of Imo State.

But the PDP, which has since rejected the ruling, during its protest on Friday, accused the Federal Government of disregarding the rule of law. The party equally called the apex court to review that ruling.

Ripples Nigeria reported that the party would take their protest to the embassies of the US, UK and the EU today (Friday).

Secondus, who spoke during the protest, said the PDP was in support of Abaribe’s call on President Muhammadu Buhari to resign over insecurity situation in the country.

He said the international community should prevail on the Buhari led Government of Nigeria to respect the rule of law especially on the judiciary and the National Assembly.

“On behalf of the PDP and the poor masses there is need for the international community to come to the assistance of our dear country.

“Nigeria is a member of the comity of nations Nigeria is not an island. The content of our letter is for the international community to advise our government to obey the rule of law, particularly as it relates to the National Assembly and the judiciary,” Secondus said.

Bike riders hit the streets to protest ban in Lagos