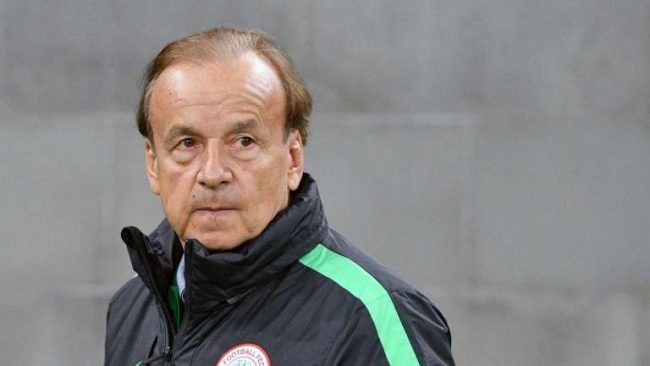 Victor Ikpeba is of the opinion that it would be better to let Gernot Rohr continue as coach of the Super Eagles until after the Africa Cup of Nations (AFCON).

The ex-Nigeria international is advising the Nigeria Football Federation (NFF) not to sack Rohr, but help the “soft” Franco-German gaffer to handle the players.

Ikpeba made this known during Monday Night Football Show on SuperSports, where he fumed that sacking the 68-year-old will spell disaster for the Super Eagles at the Cameroon tournament come January.

He warned the NFF to apply caution in the handling of the whole process so as not to affect the progress of the senior national team.

“It is less than 48 days before our first game against Egypt at the 2021 Africa Cup of Nations. The speculation about his sack has been intense and I’m really surprised,” said Ikpeba.

Read Also: Calls for Sack: 8 times Rohr slipped, including his ‘no shame in losing to Madagascar’ comment

“I know what happened in 2002 and in 2010. Rumour of people going to the Sports Ministry and the Presidency calling for Rohr to be sacked.

“Why not wait till after the AFCON and take a decision on his future. It will be a disaster if that happens now. If you sack Rohr and employ another coach, if the team fails at the AFCON who takes the blame?

“What will the new manager change. What changed in 2002 and in 2010. It was a disaster.This will happen again if Rohr is sacked now.

“My worry is that we forget history and we should not. Those who sacked the late Amodu Shuaibu twice said he was not good enough. Gernot Rohr has been too soft with the players the NFF can help him.”

Nigeria have been grouped with Egypt, Sudan and Guinea-Bissau for the AFCON, which is billed to kick off on 9 January, 2022.

Osimhen ruled out for three months after undergoing surgery