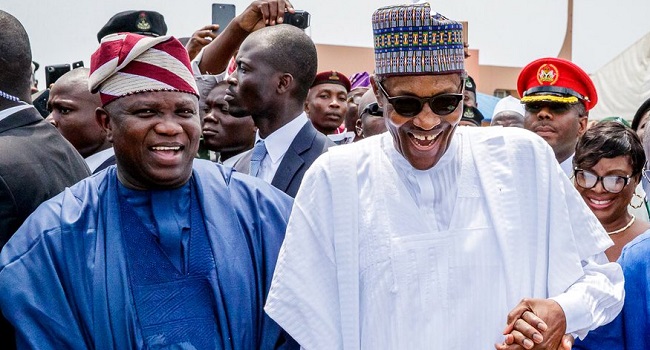 Governor Akinwunmi Ambode of Lagos State says he will campaign vigorously to ensure victory for President Muhammadu Buhari and also for Babajide Sanwo-Olu, the All Progressives Congress governorship candidate in the state in the 2019 general elections.

Ambode made the remark on Tuesday at the Presidential Wing of the Murtala Mohammed International Airport, shortly after he accompanied Buhari to perform the official inauguration of the new ECOWAS border posts at Seme-Krake joint border post in Badagry.

He said it was important for the APC to retain its leadership positions both at the federal and also at the state levels.

“I have just accompanied Mr. President to the Nigerian-Benin Border Post. What we have inaugurated today is a joint Border Patrol post between Nigeria and the Republic of Benin and it is called Seme-Krake Border Post.

“Again, just to also use this opportunity to let the people of Lagos State know that we are heavily committed to the re-election of Mr. President.

“You can see that his continuous visit to Lagos reiterates the fact that he is actually a lover of Lagos State and I am committed to ensuring his re-election.

“We are going to campaign heavily for him,” the governor said.

Ambode said he was also committed to ensuring that the APC wins the governorship election in 2019.

“We support the candidacy of Babajide Sanwo-Olu and we will make sure that APC retains Lagos State and the centre,” he said.

Ambode had earlier received President Buhari at the airport before the duo proceeded to Seme, where the President joined his Republic of Benin counterpart, Patrice Talon, to inaugurate the Border Post.

With the inauguration, the Seme-Krake joint border, one of the busiest boundaries in the country, is expected to enhance the free movement of persons and goods in the region.

It will also foster integration between the peoples of Nigeria and Benin Republic.