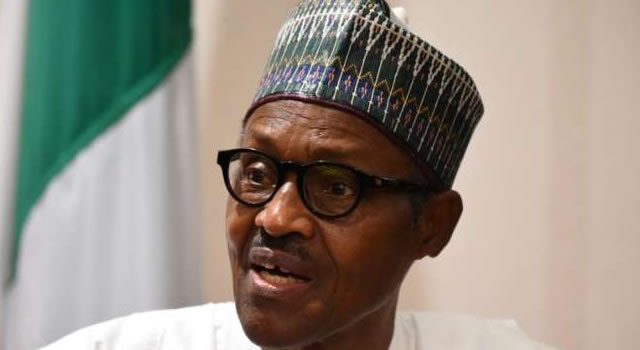 President Muhammadu Buhari on Friday said he is a descendant of Abraham.

The President said this in an article he wrote in The Church Times UK titled, “Don’t politicise religion in Nigeria.”

In the piece, Buhari eulogised the late Revd. Samuel Ajayi Crowther, reputed to have translated the English Bible into Yoruba language.

The President said just like the millions of Christians in Nigeria, he believed in peace, tolerance, reconciliation, the institution of the family, the sanctity of marriage, divine revelation, among others.

He wrote, “In 1844, Revd. Samuel Ajayi Crowther returned home to Yorubaland. Twenty years earlier, he had been kidnapped and sold to European slave traders who were bound for the Americas. He was freed by an abolitionist naval patrol, and received by the Church Missionary Society. There, he found his calling.

“Crowther made his voyage home to establish the first Anglican mission in Yorubaland. He came with the first Bible translated into Yoruba and Hausa languages. He opened dialogue and discussion with those of other faiths. And his mission was a success: Crowther later became the first African Anglican bishop in Africa.”

The President added, “Along with the millions of Christians in Nigeria today, I believe in peace, tolerance, and reconciliation; in the institution of the family, the sanctity of marriage, and the honour of fidelity; in hope, compassion, and divine revelation.

“Like Bishop Crowther, I am a descendant of Abraham; unlike him, I am a Muslim. I believe our two great religions cannot only peacefully coexist but also flourish together. But Muslims and Christians must first turn to one another in compassion. For, as it says in Amos 3.3: ‘Do two walk together, unless they have agreed to meet?’”

Buhari further said he believed that there was far more that united Muslims and Christians than what divided them.

Unfortunately, he said there were those who sought to divide Nigerians along religious lines for their own advantage.

He said he had been accused of trying to Islamise Nigeria and also accused by Boko Haram terrorists of being against Islam.

“My Vice-President is a devout man, a Christian pastor. He, too, is accused of selling out his religion, because of his support for me,” he said.

“This is not the first time that I – nor, indeed, my Christian-Muslim evenly split cabinet – have been the subject of such nonsense. Fortunately, the facts speak differently from the words of those who seek to divide us from one another.”

The President said since his administration had been in power, Boko Haram had been significantly and fatally degraded, adding that he had befriended church leaders and church groups both within and outside the country.

He said, “In all things, we seek that which all well-meaning Christians and well-meaning Muslims must seek: to unite, respect, and never to divide. Does it not say ‘There is no compulsion in religion’ (Qur’an 2.256)? Does it not say ‘Forbid him not: for he that is not against us is for us’ (Luke 9.50)? This, surely, is the path that followers of both our two great religions must walk.

“Unfortunately, those who wish us all to walk apart have recently found another focus for their efforts: the tragic clashes between nomadic herdsmen and settled farmers in the central regions of Nigeria.”

Stating that the cause of the conflict was not religious or theological, he said it was only temporary.

“At the heart of this discord is access to rural land, exacerbated both by climate change and population growth,” he said.

“Sadly, there are some who seek to play fast and loose and so make others believe that these are not the facts. When religion is claimed as the cause – and by those who know that it is not – it only makes finding a resolution more difficult.”

Buhari said his government had taken action to mediate and bring the two groups (farmers and herdsmen) together in peace and unity.

He said, “As our constitution codifies, politicising religion has no place in Nigeria; for it makes us turn away from one another; it makes us retreat into our communities and walk different paths.

“I believe that there is a better way. To those who seek to divide, I still hold my hand out in brotherhood and forgiveness. I ask only that they stop, and instead encourage us to turn towards one another in love and compassion. Nigeria belongs to all of us. This is what I believe.”