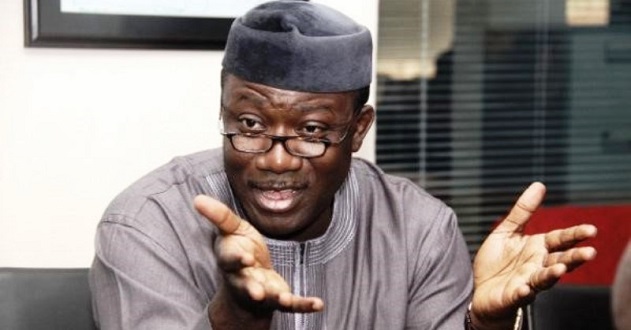 Kayode Fayemi, Governor of Ekiti state, has said he has no intention of undertaking a probe into the record of his predecessor, Ayodele Fayose.

Speaking with State House correspondents after meeting with President Muhammadu Buhari on Monday, Fayemi explained that there was never a time he said he would probe Fayose.

According to him, reports of such probe are on the table of anti-graft agencies.

“Well, I am sure I have never said anything about probe, and I do not say anything about probe. Looking into books is the duty of any new governor, you need to know what you found in place, I just talked about visitation panel into the education sector in the state,” he said.

“There are other sectors in the state, and it will be remiss of me not to check what we found when we came into office and share that with the citizens of the state.

“It is just accountability not probe. I am not EFCC, I am not ICPC, there are institutions that are charged with the responsibility to do that and it’s entirely up to them if they want to probe the governor or not.

“It is not my business, I leave Fayose to God, I have said that before.’’

Fayose is currently being prosecuted by the EFCC over an 11-count charge of alleged conspiracy and money laundering.

Speaking on the state of education, Fayemi said Ekiti had a tradition of being the intellectual capital of the country but it seemed to have lost that edge lately.

He said his government was working toward repositioning the sector, particularly at the basic and tertiary levels.

The governor said he had set up visitation panel in all the tertiary institutions in the state to review and recommend what the critical and challenging issues were and how government should respond to the yearnings of the sector.

He said the government was taking specific steps to address access to education in the basic education sub-sector.

“Before now, Ekiti used to be the leading state in terms of school enrollment in the country but the latest figures we received from the Universal Basic Education Commission (UBEC) makes it clear that we are lagging far behind,” he said.

“We have moved from 96 per cent enrollment in the entire country to about 45 per cent meaning that about 55 per cent of our school age children are of school.

“That is unacceptable in a state like Ekiti and we need to find out what has happened between 2014 and 2018 leading to this appalling figure in terms of school enrolment.

“And one of the very first things we are doing to improve enrolment is to make sure that all fees and levies in the primary and secondary sector are removed, so we have removed that.

“We have returned free compulsory and qualitative education to our basic education sector.’’

The governor dismissed insinuations that he was having disagreement with the labour union in his state.