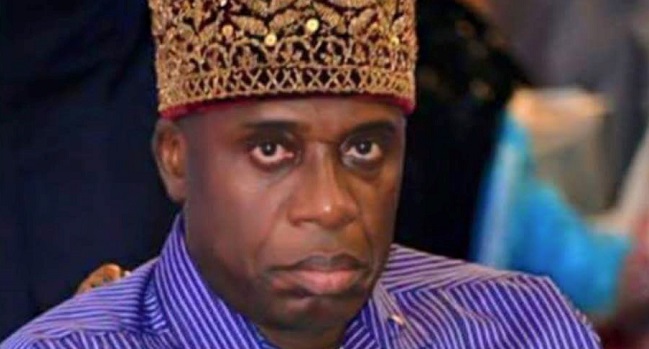 The director general of the All Progressives Congress Presidential Campaign Organisation (APCPCO), Rotimi Amaechi, has challenged Peter Obi, vice-presidential candidate of the Peoples Democratic Party (PDP) to a debate.

Speaking in Kano on Thursday during the APC’s presidential campaign stop at the ancient city, Amaechi said Peter Obi lied about infrastructure and transportation, while fielding questions from Kadaria Ahmed at the presidential town hall debate.

“I need to address some important issues, I’m addressing Nigerians, not just Kano indigenes; I speak today as a Catholic Christian. I speak with responsibility as a former governor of Rivers state, and former chairman of the governors’ forum.

“I have told my friend and my former deputy, his excellency Peter Obi, that the moment you climb the post of governor, you must deal with facts and figures, you must not lie to the people lead.”

Amaechi said Peter Obi lied by saying that former president Goodluck Jonathan had released money for all the rail projects completed by the Muhammadu Buhari administration.

“It is not correct from what my friend and former colleague said that the former government of president Goodluck Jonathan had paid all the money for the railway, before we came. It is not correct,” Amaechi said.

“If they had paid all the money the contractors would have completed the job, why didn’t they complete it in their regime? We are looking for $500 million to complete all the airports, it is not correct that they had finished payment for the Abuja-Kaduna rail.

“As a former governor and a vice-presidential candidate, we expect that Peter must work with figures, he could have come to my office and ask for those figures, we would have given to him.

“He is also not correct that the Lagos-Ibadan was also there. We had to borrow money to fix the Lagos-Ibadan, there is a need for them not to deceive Nigerians. That project was initiated by us, paid for through the loan we got from China Exim bank.

“So the statement yesterday by my friend, governor Peter Obi is not correct, and if he wants it, I am ready to open a debate with him, with facts and figures and documents to show that he is not correct.

Related Topics:2019AmaechiAPCdebatePDPPeter Obi
Up Next

‘Ganduje innocent until proven guilty in a court of law’- Buhari

SERAP cautions Atiku over comment to grant amnesty to looters