‘I'm tired of this calamity; it's better I die and go to rest in paradise’, Shekau says in new video 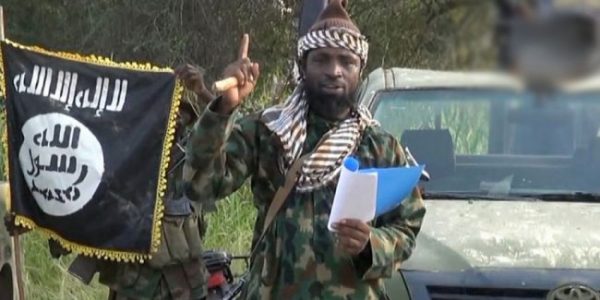 Boko Haram leader, Abubakar Shekau, has revealed in a new video that he was tired of “calamity” and longed for rest in “paradise”.

“I am tired of this calamity; it is better I die and go to rest in paradise”, he said at the end of the 10-minute video.

In the video, delivered mostly in Hausa, Shekau pleaded with non-combatant members and sympathizers of the group across Nigeria and around the world to take up arms and help fight against their common enemy until the last drop of their blood.

For the most part, Shekau remained defiant, disputing claims by the Nigerian Army that the group had been defeated.

Flanked by two hooded armed men, Shekau said the latest claim by the military that the group had been dislodged from Sambisa forest was false.

He boasted that he was still in Sambisa forest and still controlled the territory.

The wanted terrorist said that his men would continue to fight regardless of the recent addition of Cameroonian soldiers into the Operation Lafiya Dole counter-insurgency force.

Below is the full text of the translated speech by the Boko Haram leader.

“I have no lengthy message to deliver except on the issue of worshiping God alone and serving Him without getting tired. Ours in not like that of the unbelievers whose worship is like the spider web. Just like one of the leaders of unbelievers, who is like an ape, was recently boasting that they have formed a joint force with Cameroonian forces to fight us.

“That they would not only chase us from Sambisa forest but also in all parts of Nigeria. So we too have declared that we do not want to see any Nigerian in Cameroon, in Chad, in Nigeria and even Benin Republic. So I call on our brethren in Abuja, in Lagos, in Benin, in Kaduna, where ever you find any Nigerian make sure you shoot him dead if he is deliberately against us; but if he is ignorant of our ways, teach him on how to understand our ways. This is our first message.

“It is not about approaching you, because that has already been done by our God.

“Our second message is to attack anyone who pledge to Nigerian his country, to be faithful, loyal and honest, and serve Nigeria. Anyone who believes in protecting the interest of Nigeria is our target. The one whose creed is to develop western education where infidels are trained is our enemy. Whoever that stands on any creed other than that of our Prophet Muhammad brought to us; the one that his great disciples followed, should know that he is our avowed enemy and if he confronts us we will fight him.

“In this job that we embarked upon, we are not going to boast too much about, but we pray that God should take our lives while on this struggle and not on any other thing else. May God help us on this belief.

“So you Nigerians especially the youth vigilante, we are going to fight you and that thing that drives you to pick up arms against us; we don’t care what they call you, be it Civilian-JTF or any kind of force. Just as you said you don’t want us on the face of Nigeria, so shall we too declare you persona non grata in Sambisa. Let anyone who has brains to think to avoid moving around Sambisa forest. Those of you the leaders of the troops will no longer have peace just like the way you think you have made here uncomfortable for us.

“And you General Rogers that is currently leading the troops and boasting that that you have take-over Sambisa and have rescued some women, why have you not rescued the police women that we abducted? You liar, why couldn’t you rescue them? You are busy deceiving with images of vehicles that we seized from you and abandoned for over three years and claiming that you have killed us. If you have killed us, why are we still alive?

“Oh you brethren of our holy creed, wherever you are, should rise up and fight for Allah. If you cannot do it there, then come over to our side and fight for the cause of Allah. You must know that whoever that fails to follow the teaching of the Holy Quran and Hadith cannot enter paradise. (In broken voice) Because the pattern of life in the world today is not Islamic. Wherever you are, even if you are in Saudi Arabia, and you have your gun, please stand up and fight, kill whoever you see that is not on our side. Kidnap and bring them to us. Our course is to establish our caliphate and die doing that. We may not be alive to see the caliphate but even if it comes to be after we have died, it is still a bonus on our side.

“This is the message I have for you all. My name is Abubakar Shekau, the one that is an invincible enemy that you are fighting.

“That is our stand. I am tired of this calamity; it is better I die and go to rest in paradise.”