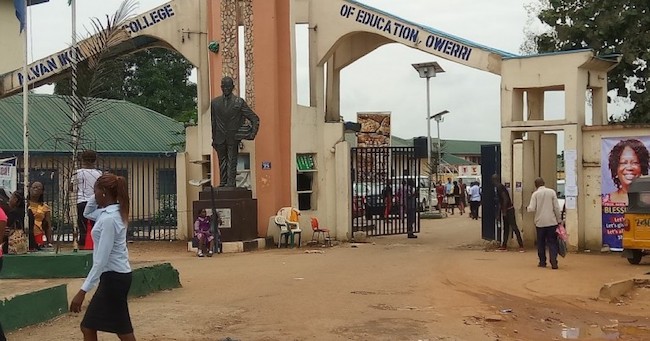 The alleged killing of a “spiritual python” by students of the Alvan Ikoku Federal College of Education, Owerri, Imo State, has become the cause of a serious altercation between the community and the school authorities.

The community’s Chief Priest, Reginald Ejiogu, had in a letter to the institution’s management last week, said the killing of the python was a serious offence that required major sacrifices to appease the gods of the land.

He added that the python belonged to the Owerri ancestry and had free access to every part of the community.

The priest subsequently gave the college a seven-day ultimatum to appease the gods, failure in which a calamity would befall the institution and the students.

The ultimatum will elapse on Wednesday.

However, the institution has rejected the community’s demand.

An official of the college, who pleaded anonymity, told journalists the school would rely on the power of prayer to ward off any attack from the Owerri ancestry powers.

The official said the school management had convened an emergency meeting of leaders of religious groups in the institution to inquire if their “firepower would be able to repel any attack from the ancestors of Owerri,” to which the religious leaders insisted that the college should not yield to any request to appease the gods.

“The institution and students have already embarked on week-long prayer sessions to fortify the college against any attack,” he said.

Ripples Nigeria gathered that students of the institution killed the python after it swallowed two goats on the campus a few days ago.

Two days after the incident, Ejiogu raised an alarm that the institution had killed the Owerri ancestral python, saying nobody kills the animal and goes scot-free without appeasing the gods.

The priest recalled how road construction workers had killed the mother python many years ago and refused to come for a ritual to appease the community ancestors.

He claimed that some of the workers later died while their equipment broke down before the ritual was performed.