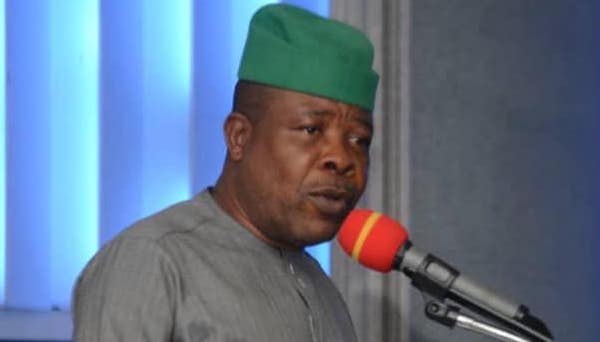 The immediate past Deputy Speaker of the Imo State House of Assembly, Okey Onyekanma, has denied reports that he led the immediate former Governor of the state, Emeka Ihedioha, to the Assembly to beg for forgiveness over the ongoing probe into the alleged missing N19.68 billion local government funds.

Onyekanma, who made the denial in an interview with journalists in Owerri, on Sunday, added that the picture attached to the story circulating online was doctored.

He said: “(My) attention has been drawn to a doctored picture attached to a story circulating online, insinuating that the immediate past Governor of Imo State, His Excellency, Rt. Hon Emeka Ihedioha, sneaked into the state House of Assembly complex recently, with the aid of the former deputy speaker, Rt. Hon Okey Onyekanma, member representing Mbaitoli State Constituency, to plead with lawmakers for ‘soft landing’ in the ongoing probe of N19.68b LGA funds.

“The peddlers of the fake, unsubstantiated and damaging news, edited an old picture to give undeserving credence to their misinformation.

Read also: Three-year-old COVID-19 patient, one other recover in Enugu

“We wish to state, without any fear of contradiction that the picture was taken in July, 2019, when Rt. Hon Emeka Ihedioha, as then governor visited the Imo State House of Assembly

“It is unfortunate to note that some people who are on wild goose chase doctored the picture and imputed the picture of the Governor of the state, His Excellency, Distinguished Senator Hope Uzodinma, asserting that H.E Rt. Hon Emeka Ihedioha and Rt. Hon Okey Onyekanma (Nmaoha) visited the speaker of IMHA, recently.

“The news is fake and I urge the general public to treat it as such.”