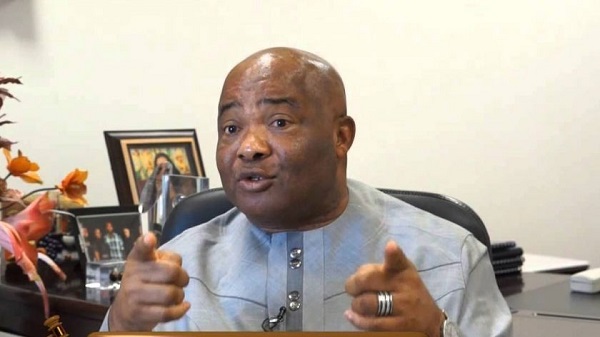 The outcome of the just concluded governorship election in Imo State has been rejected by the candidate of the All Progressives Congress (APC).

According to the APC candidate, Hope Uzodinma, who came fourth in the election, he clearly won the election which was massively rigged against him.

Uzodinma revealed this at a press conference in Owerri. He added that the results announced by the Independent National Electoral Commission (INEC) was unacceptable to him and his party.

He also refuted claims that he had congratulated the governor-elect, Emeka Ihedioha of the Peoples Democratic Party (PDP).

His comments comes after the outgoing Governor of Imo State, Rochas Okorocha called on the newly elected leader of the state, Emeka Ihedioha to get sworn into government house before issuing directives.

Okorocha issued the caution to Ihedioha in a statement by his Chief Press Secretary, Sam Onwuemeodo, in Owerri, the state capital.

He described the directive by Ihedioha to financial institutions in the state over their dealings with the state government on Thursday as “unfortunate and a sign of ugly things to come”.

Okorocha advised Ihedioha to be patient and wait until he was sworn in before issuing directives to financial institutions not to engage in new transactions with the government.