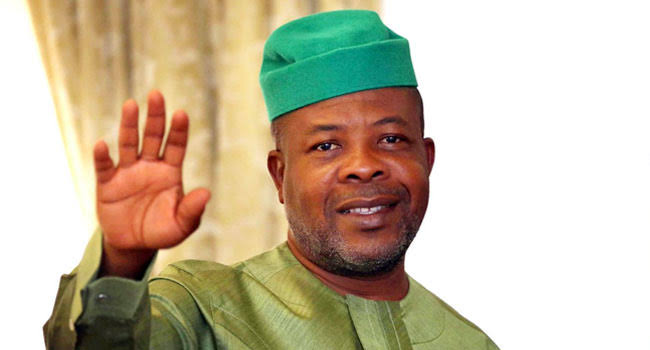 Imo State of Governor, Emeka Ihedioha has sent a clear message to functionaries of the administration of former Governor Rochas Okoroch, declaring that every official of the last administration in the state found wanting, would account for their actions.

The newly inaugurated governor and former Deputy Speaker of the House of Representatives made the declaration during his inaugural speech shortly after he was sworn in by the Chief Judge of the state, Justice Paschal Nnadi.

The new governor, who said he is not on a mission to witch-hunt anyone, however insisted that he has a responsibility to ensure that people, especially those who have cases to answer, are held responsible for their actions.

Acknowledging that the state is at the moment in a hole, Ihedioha declared that the task ahead of his administration is an enormous.

He however assured the people of the state of his resolve to rebuild the state with the help and support of the people.

The speech reads in part: “Distinguished ladies and gentlemen, though some may argue that today is not for a long speech, a brief assessment of where we are coming from is necessary in order to draw a realistic compass for tomorrow. It has been a tale of woes for the people of Imo State, these past eight years. The APC administration degraded and destroyed most of our institutions and values. Indeed, all aspects of governance were debased and desecrated. The Legislature, the Judiciary and the Civil Service, all suffered grievous assault. Imo State House of Assembly was made redundant, court orders were routinely disregarded and often times government appeared to act in breach of our Constitution and laws. Pensioners are owed for over 77 months, accruing fifty-seven (57) billion naira in Pension liability alone.
​
“Eight years of maladministration, policy inconsistencies and disregard for rule of law destroyed, literally, the foundations laid by our founding fathers, dis-articulated a thriving economy, lowered the educational standards, chased away investors, confiscated people’s lands, expropriated our commonwealth and threw to the dogs our collective esteem. Eight years of bad governance led to a mind-boggling decay of critical public infrastructure; a crippling debt burden without any meaningful infrastructural or institutional developments to show for such a humongous debt. The health sector fared even worse.

“The absolute lack of transparency and due process in land administration and the distortion of the carefully laid out Owerri Master Plan resulted in many citizens losing their lands, houses, and business premises which they acquired legally while public open spaces and green belts were converted to unapproved uses.

“In the light of recent revelations by interest groups, various institutions and agencies of state, many have asked what becomes of those who recklessly plundered our commonwealth. My answer is simple: They will be held accountable. While this administration will be forward looking and not embark on any witch-hunting, those who have held positions of authority must prepare to render account of their stewardship to the people because our resolve to hold their feet to the fire of probity and accountability is iron-clad.

“We must tell ourselves the ‘frank truth’ about the state of our State. We cannot play the ostrich pretending that all is well when indeed we are in a deep hole. Imo is broken and the climb out of the depths of despair will be steep, arduous and tortuous. Today I say to you that the challenges we face are real. They are serious, and they are numerous. They will not be met easily or in a short span of time.

“But let no one underestimate our resolve to do what is right for the good of our people. There is nothing wrong with Imo which cannot be cured by all that is right in Imo. Imo State will, as always, endure. Imo will revive. Imo will prosper again. The task of rebuilding our broken State is a sacred one. It must be done. We are armed with the courage of our conviction. We are not captives of fear, for if we were, we would not have dared and if we did not dare, this day would not have come.”

The inauguration of Ihedioha and his deputy, Hon Gerald Irona was held at the Dan Anyiam Stadium, Owerri, amidst dancing, drumming and wild cheers and celebration by the mammoth crowd at the stadium.
The 11th global edition of Excel Magazine International will run details and images from the swearing-in and other inauguration activities. It will be at the newsstands shortly.