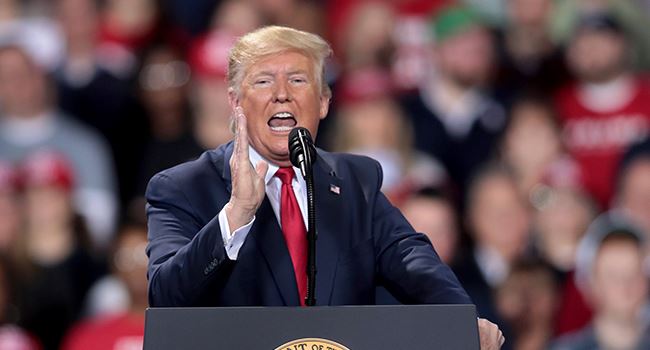 As President Donald Trump officially became the third United States president to be impeached, he was on stage at a “Merry Christmas” rally in Michigan laying into Democrats and claiming they have “branded themselves with an eternal mark of shame.”

According to him, “With today’s illegal unconstitutional and partisan impeachment, the do-nothing Democrats are declaring their deep hatred and disdain for the American voter,” Trump said in Michigan after being on stage for about an hour.

CNN reports that Trump likened the impeachment proceedings to a “political suicide march” and said he would prevail in the end.

“Have you seen my polls?” an incredulous-sounding Trump said to roars.

Shortly after the impeachment vote closed, Trump decried the situation in which he found himself.

“After three years of sinister witch hunts, hoaxes, scams, the House Democrats are trying to nullify the ballots of tens of millions of patriotic Americans,” he said.