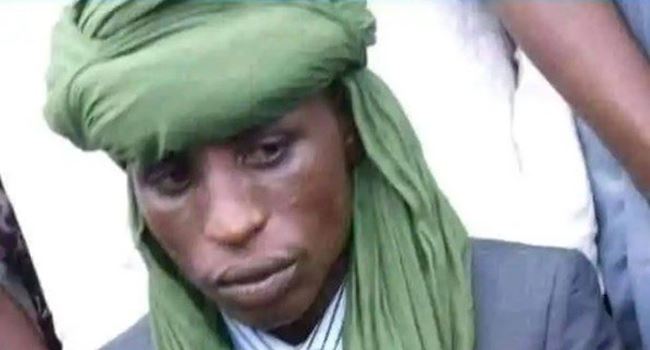 A notorious bandit leader, Bello Turji, who is infamous for his incessant attacks on commuters and villagers in the Northern region has revealed his readiness to lay down arms if the Federal Government agrees to some conditions.

Turji reportedly addressed President Muhammadu Buhari, Governor Bello Matawalle of Zamfara State and the Emir of Shinkafi. via a three-page letter on Sunday.

The infamous terrorist is originally from Shinkafi Local Government Area of Zamfara State and the letter was reportedly delivered to the emir of the area.

Turji, in the letter written in Arabic, promised to embrace peace if the federal and state governments, as well as the Shinkafi emirate, promise to accept him.

He further said he was ready to surrender all his arms if the five conditions in the letter are met.

He listed the conditions as dissolution of unofficial vigilante groups in the North-west, a meeting with traditional rulers and religious leaders, a stop to the ‘marginalisation’ of Fulanis; honest discussions between bandits, traditional rulers and politicians, and the participation of first-class emirs in a security meeting.

“Unnecessary Killing of people will be over,” he said. “Because unofficial vigilante members would just see innocent person and kill … We need to be seen as people with equal rights like any other person else. We’re being killed unnecessarily. We’re being relegated to the background. We should be allowed to return to our houses and live normal lives. We also want to have a meeting with our traditional rulers and religious leaders to iron out issues.

“We’re not fighting the government or trying to form our government. No! We’re just tired of the marginalisation of the Fulanis; especially in the markets. So, if you people need peace to reign, we should do it for the sake of God. And for normalcy to return, we want a situation whereby no one will be cheated,” Turji said.

He also charged the FG to invite Ahmed Gumi, first-class emirs and notable Islamic scholars for a summit with the bandits.

“… especially Sheikh Ahmed Abubakar Gumi; we know him because he came here and preached to us and we’ve witnessed the importance of peace due to his counsel, hence, the need for us to do our best for peace to return to our land.”