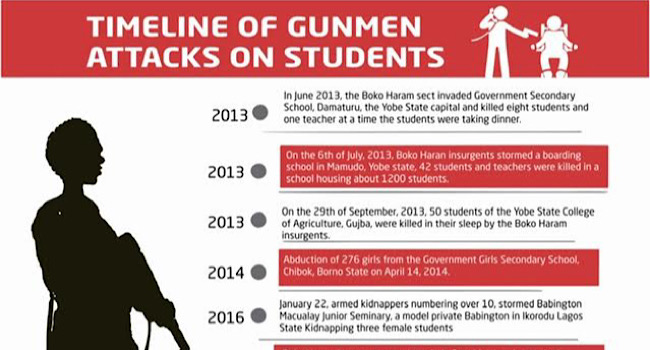 No fewer than 802 students have been abducted across the country in the last nine years, a Ripples Nigeria compilation of reports on attacks on schools has shown.

The latest is the 27 students and 12 teachers of Government Science College abducted in Kagara, Niger state, in the early hours of Wednesday morning.

The abduction of the schoolboys in Niger is the latest of many since 2013.

In June 2013, the Boko Haram sect invaded Government Secondary School, Damaturu, the Yobe State capital and killed eight students and one teacher at a time the students were taking dinner.

This was followed by Boko Haran insurgents attack on a boarding school in Mamudo, Yobe State, on the 6th of July, 2013. Forty-two students and teachers were killed in a school housing about 1200 students.

On the 29th of September 2013, Yobe State, news again broke that 50 students of the Yobe State College of Agriculture, Gujiba, were killed in their sleep by the Boko Haram insurgents.

The abduction of 276 girls from the Government Girls Secondary School, Chibok, Borno State on April 14, 2014, sent a shock wave across the country.

When everyone thought the incident of school kidnapping was limited to the North, on 2nd March 2016, the Lagos State police command was alerted to the news of the kidnap of three female students of Babington Macaulay Junior Seminary School.

After almost two years of no attack, on February 19, 2018, Government Girls’ Science and Technical College (GGSTC), Dapchi, was invaded as gunmen abducted 110 girls in the process.

Similar to the previous break, two years again, 344 students of Government Science Secondary School, Kankara, in Katsina State, were marched into captivity by gunmen suspected to be bandits bringing the total number to 802.