Inauguration Day 2021: Schedule of events as US move from Trump to Biden | Ripples Nigeria 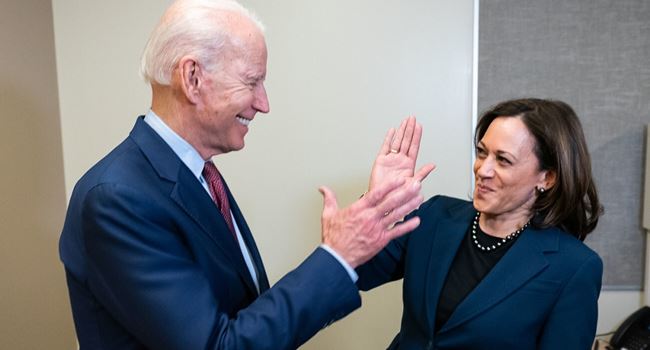 President-elect, Joe Biden will be sworn in on Wednesday as the 46th president of the United States alongside Kamala Harris who will be sworn in as the country’s first female vice-president.

The inauguration theme, “America United,” according to the Presidential Inauguration Committee (PIC) “reflects the beginning of a new national journey that restores the soul of America, brings the country together, and creates a path to a brighter future.”

However, due to COVID-19 restrictions and security concerns over the January 6 riots at the U.S. Capitol building, the inauguration will be much different from those held in past years with it being mostly virtual, while the crowd will be kept to a bare minimum as 20,000 National Guard troops have been deployed around Washington, D.C.

The PIC has installed a public art display called “Field of Flags,” at the National Mall to represent the people unable to travel to the city for the ceremonies.

Here is a schedule of what has been planned for the inauguration:

8:00 a.m.: Outgoing President Donald Trump has planned a sendoff at an airfield at Joint Base Andrews in Maryland, where he is expected to make remarks, then board Air Force One for the last time as he heads to his Mar-a-Lago resort in Palm Beach, Fla.

10:00 a.m.-12:30 p.m.: The livestream event “Our White House: An Inaugural Celebration for Young Americans” will be hosted by actress Keke Palmer.

The event will act as an explainer for young Americans before and during the ceremony. It will feature incoming first lady Jill Biden and historians Doris Kearns Goodwin and Erica Armstrong Dunbar.

The event will also include a trivia portion with questions produced by the Library of Congress and a segment on presidential pets produced by Nickelodeon.

12:00 p.m.: Biden and Harris will be sworn in at the US Capitol building. US Supreme Court Chief, Justice John Roberts, will administer the oath of office to Biden.

Then, US Supreme Court Justice, Sonia Sotomayor, will swear in Harris.

Biden will deliver his inaugural address. He is expected to discuss the pandemic and the unification of the nation.

Other participants will include:

12:30 p.m.: Biden, Harris and their spouses, Dr. Jill Biden and Douglas Emhoff who will be addressed as Second Gentleman, will participate in a Pass in Review with every branch of the military.

Afterward, all four will lay a wreath at the Tomb of the Unknown Soldier.

3:15 p.m.: The two couples will receive a presidential escort to the White House, accompanied by the military and the drumlines from Biden and Harris’s alma maters.

The televised event, “Parade Across America,” will be hosted by Tony Goldwyn and will feature performances by Earth, Wind and Fire, TikTok star Nathan Apodaca, and comedian Jon Stewart.

Related Topics:BidenHarrisInauguration Day 2021trump
Up Next