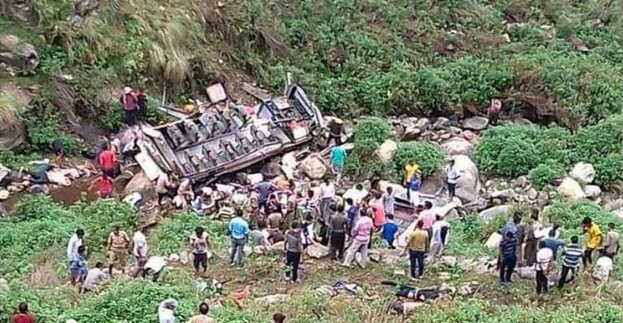 Tragedy struck in the northern Uttarakhand state of India when a bus filled with passengers fell into a gorge in a mountainous area of the region.

Reports say no less than 45 people lost their lives following the incident which happened on Sunday as authorities have launched a probe to ascertain the reason behind the accident.

“The bus lost control and swerved off the road, into a deep valley. It broke into two pieces on impact and it is now in a small river at the bottom of the valley,” disaster management official Deepesh Chandra Kala revealed.

“As per official records, 45 people are dead, while many are injured,” Surendra Agrawal, official at the Chief Minister’s Office in Uttarakhand told Al Jazeera.

“Over 50 people were travelling in the bus,” he added. “A probe will determine the reason of the accident, it could be human error or a technical snag.”

According to chief minister of the state of Uttarakhand “a magisterial inquiry has been ordered” and the injured have been rushed to hospital.