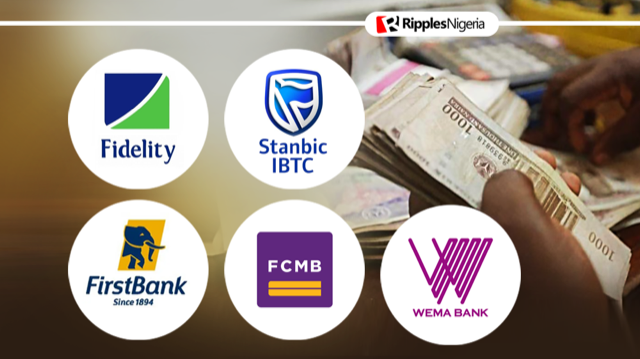 There were two major changes in the best performing banks in Nigeria’s financial industry in the second quarter (Q2) of 2022, with tier-two lenders pushing all but one of the tier-one credit firms out of the top five performing list.

Ripples Nigeria’s top five performing bank list is determined by each firm’s Net Interest Income growth, which is the balance from turnover of interest-bearing assets, such as corporate, personal and other types of loans, as well as cost of servicing liabilities like customers’ deposits.

During the quarter in review, findings showed eleven Nigerian major banks grew their Net Interest Income by 29.35% (representing N138.38 billion) to N609.84 billion, in contrast to the N471.46 billion grossed in Q2 2021. (Access Corporation’s earnings result was not included, as it’s yet to be released.)

(1) Both Zenith Bank and Union Bank dropped from the top five list in the second quarter of 2022, indicating declining performance, with Fidelity Bank and Wema Bank replacing them.

(2) In Q1 2022, none of the 12 banks reviewed grew their Net Interest Income above 50%, however, in Q2, three banks broke the ceiling; Fidelity Bank, Stanbic IBTC, and First Bank, with the former surpassing 100%.

(3). Access Bank wasn’t included in the list due to unavailable figures from the firm which has obtained extension or grace period from the Nigerian Exchange Limited (NGX), however, note that the lender reported -7.02% Net Interest Income in Q1 2022.

(4) The least performing lenders or bottom five couldn’t achieve a 20% growth during the period in review, falling at least 18.8% behind the top five performing banks;

The ranking is listed from the best performing commercial bank to the least, with some major key takeaways.

Fidelity Bank closed the second quarter of this year with 112.06% year-on-year growth in Net Interest Income, which moved the firm from the bottom five in Q1 to becoming the best performing lender in the period under review.

• The growth represents N4.07 billion, considering Fidelity Bank improved its profit after tax from the N9.71 billion grossed during the corresponding period.

In the first quarter, Stanbic IBTC was the best performing bank, however, it was displaced and left with the second spot in Q2 2022, despite surpassing its Q1 effort after growing Net Interest Income by 58.17% year-on-year.

Stanbic IBTC reported N26.92 billion Net Interest Income for Q2 this year, surpassing the N17.01 billion that the firm posted in the same period in 2021 – a difference of N9.90 billion.

• This is a difference of N4.31 billion or 38.22% growth, as the financial institution had generated N11.28 billion profit after tax during the contrasting period in Q2 2021.

First Bank of Nigeria also dropped a spot down on the top five list to become the third best performing bank in Q2, following a 56.9% year-on-year growth in its Net Interest Income which closed the period with N80.11 billion.

The percentage growth represents N29.08 billion, considering First Bank had reported that its Net Interest Income for the three months period of Q2 2021 was N51.03 billion.

• Analysis shows the slight increase is a 7.52% growth in net profit, when compared to the N22.44 billion in the second quarter last year.

Despite recording 39.9% year-on-year growth in Net Interest Income, First City Monument Bank was ranked below its Q1 position, falling from third to fourth on the top five performing banks in Q2 2022.

The Net Interest Income of FCMB had increased from N42.99 billion recorded in the second quarter last year, to N60.16 billion in the same period this year.

• This pushed the company’s net profit to N13.66 billion in the second quarter of 2022, surpassing the N7.55 billion profit after tax grossed in Q2 last year.

Wema Bank is another new comer, completing the top five performing bank list after analysis indicated its Net Interest Income rose by 37.6% year-on-year, to close the period under review with N13.13 billion.

This is in contrast with the N9.54 billion Net Interest Income recorded by Wema Bank in the second quarter last year.

• Also, the financial institution reported that it grossed N2.419 billion as profit after tax in Q2 2022.