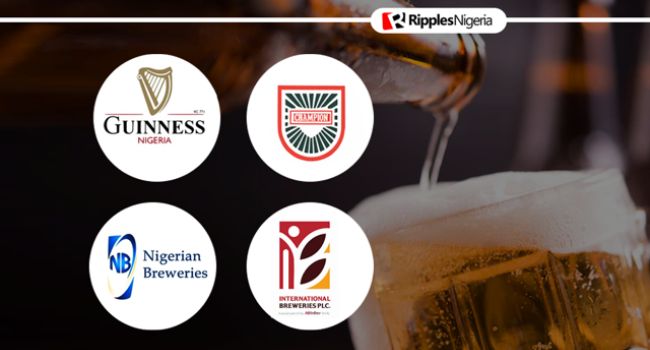 Alcoholic and non-alcoholic producers in the Nigerian market cashed in on heavy drinkers in the first six months of 2022, as their turnover for the period grew 31.2%, while net profit surpassed revenue, rising 54.1% year-on-year.

• During the period under review, Ripples Nigeria analysis showed that Nigerian Breweries lost part of its revenue market share, as it fell slightly to 45.7%, from 45.8%, while its closest rival, Guinness, also shed its share, dropping to 34.5% from 35.1%.

• Together, the four major companies pulled N36.14 billion profit after tax between January to June 2022, rising by 54.1% year-on-year, when compared to the N23.44 billion they reported same period last year.

Ripples Nigeria gathered that as revenue grew, so did the cost of sales of Champion Brew, with the company spending N4.20 billion to produce its drinks, significantly above the N2.89 billion expended a year before.

However, it had little impact on its net profit, which rose 141.6% year-on-year, considering it recorded N1.07 billion profit after tax between January to June 2022, in contrast to the N445.23 billion of H1 last year.

The International Breweries queued behind Champion Brew, as the former recorded 35.9% in its H1 turnover, which rose to N111.40 billion this year, from N81.96 billion posted during the corresponding period.

International Breweries also failed to keep cost low, disbursing N74.79 billion to produce its brands for the Nigerian market in the first half of this year, having spent N81.96 billion same period 2021.

The market leader was the third best performing brewer, generating N274.03 billion in the first six months of 2022. This is 30.9% higher than the N209.21 billion grossed during the corresponding period of H1 last year.

Nigerian Breweries also saw significant expenses eat into its revenue, with cost of sales gulping N155.34 billion between January to June 2022, against the N131.33 billion recorded as expenses same period a year before.

Guinness posted the lowest revenue growth among its peers in the alcoholic and non-alcoholic market during the review period, with Ripples Nigeria analysis showing turnover was up 28.9% year-on-year, from N160.41 billion in H1 2021, to N206.82 billion.

Similarly, Guinness Nigeria’s expenses on production also recorded an upward movement, with the products costing N134.15 billion to produce in H1 2022, above the N114.70 billion they cost the firm last year first half.

Meanwhile, compared to its market rivals, Guinness posted the highest profit after tax growth of 1146.7% year-on-year, recording N15 65 billion this year, significantly above the N1.25 billion of H1 2021.