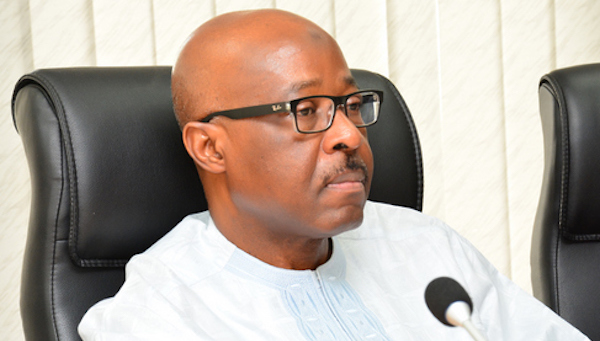 An official of the Independent National Electoral Commission (INEC), Dr. Mustapha Lecky, on Friday dismissed the Peoples Democratic Party (PDP) claim that he was working with the All Progressives Congress (APC) to rig next week’s governorship election in Edo State.

Lecky, who is the National Commissioner and Chairman, Planning, Monitoring and Strategy Committee of INEC, told journalists in Abuja that the claim by the PDP National Publicity Secretary, Kola Ologbondiyan, was a clear figment of his imagination.

The PDP spokesman had accused the INEC official of working with the APC governorship candidate, Osagie Ize-Iyamu, and the party’s former National Chairman, Adams Oshiomhole, to rig the Edo election.

The APC had earlier alleged that the PDP was working with the Resident Electoral Commissioner in Akwa Ibom, Mike Igini, to manipulate the election.

Therefore, the accusation and counter-accusation between both parties are expected to continue in the days leading to the election.

The INEC official confirmed the assertion in his reaction to the PDP’s claim, saying allegations such as the one from the party are unexpected on the eve of a major election.

He said: “Traditionally, these sorts of allegations are not unexpected on the eve of a major election, I mean where political parties will spew out all manner of things about people.

“The downside of that is that they are stylishly tarnishing the image of the people and they have no fact about what they are saying.

“It just shows that somebody who is the spokesman of PDP, whom I suppose is a long-standing politician in the party, should know about electoral process and how INEC functions. He should know that INEC is never contesting any election.

“Clearly, this is just a figment of his wide imagination. It is not true, it is not possible and I don’t know why he will link with me with APC.

“I am not a card-carrying member and I have never been. I don’t vote, I don’t exercise any franchise.

“If you look at it critically you will know that some things don’t make sense, but not unexpected at this time of a major election.”