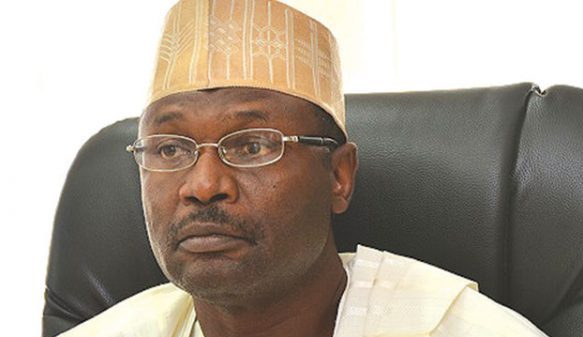 The Southern and Middle Belt Leaders’ Forum on Sunday cried out for the suspension of the chairman of the Independent National Electoral Commission (INEC), Mahmood Yakubu.

The group alleged that the commission under Yakubu’s watch plans to rig the forthcoming coming 2019 general elections.

Leaders of the group, who had earlier passed a vote of no confidence on the INEC boss, yet again on Sunday, raised the alarm that the commission is currently registering foreigners in their numbers, majorly from Niger Republic, all in a bid to pave the way for electoral malpractices in 2019.

This was contained in a communiqué by the forum which was made available to newsmen on Sunday.

They argue that such an act explains why the Federal Government is in a hurry to construct a rail line from Kano, through Dambatta, Kazaure, Daura, Mashi, Katsina, Jibia to terminate in Maradi in the Niger Republic.

The Communiqué, entitled “Our case against 2019 elections preparations” and signed by Yinka Odumakin (South-West); Senator Bassey Henshaw (South-South); Chigozie Ogbu (South-East) and Dr Isuwa Dogo (Middle Belt), followed the meeting of the leaders of the regions in Lagos on Friday.

They insisted that Yakubu, who they said they have lost confidence in, should be suspended pending the investigation of the underage voter scandal in Kano, adding that his conduct over the scandal of underage voters in Kano has “shown a gross betrayal of public trust.”

They said that they gathered through intelligence reports that INEC was registering Nigeriens and other foreigners for the purpose of voting in the 2019 elections.

“Equally worrisome is the intelligence report at our disposal that a large number of mercenary voters have been registered from neighbouring countries especially from Niger Republic under the continuous voter registration which could have been one of the reasons why the Federal Government is in a haste to construct a rail from Kano, through Dambatta, Kazaure, Daura, Mashi, Katsina, Jibia and terminate in Maradi, Niger Republic. Money has been appropriated for this in the 2018 budget,” part of the communiqué read.

The forum recalled how INEC chairman had assured Nigerians that alleged underage voter scam in Kano would be fully investigated, and how he had promised to look into the voter registers nationwide in order to purge them of any possible ineligible registrants, but has failed to make the findings of the investigation public.

“Five clear months after the promise and prompt conclusion of the assignment by the team he set up, the INEC chairman has refused to release the report which would necessarily have necessitated a nationwide interrogation of the voter registry.

“Information at our disposal is that the report of the committee is so damning and that is the reason why he is doing a macabre dance on it. How on earth can we trust a man doing such over an issue of public knowledge to be fair on matters relating to free and fair elections that would not be in the public glare?

“We demand the immediate release of the INEC report on the Kano underage voter’s scandal and interrogation of the voter registry by a judicial commission with representatives from international and local elections observers to check cases of underage voters and foreign mercenaries before the 2019 elections. This is very necessary as INEC cannot be a judge in its own case,” the group said.

They also demanded that for equity that President Muhammadu Buhari should “rejig the nation’s security apparatus” without delay and “reconstitute the security apparatus so as to earn the confidence of all communities in Nigeria.”

Meanwhile, Ripples Nigeria gathered from a monitored report that the INEC Director of Publicity and Voter Education, Oluwole Osaze-Uzzi, has challenged anyone who had evidence of registration of foreign voters to come forward with such.