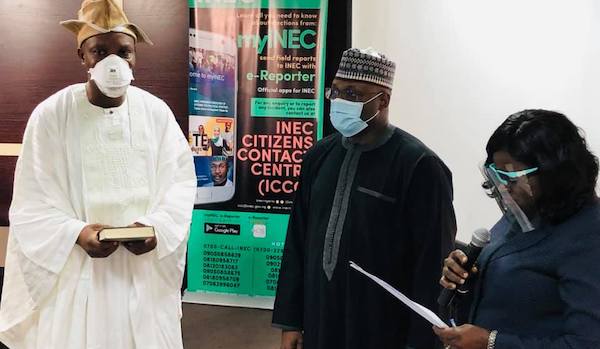 The INEC chairman said Rahmon would be deployed to Ekiti State.

He advised the new REC to be firm and prudent in the discharge of his responsibilities and the management of resources under his watch.

“You should be firm and always mindful of the fact that ours is an onerous responsibility and you must always be on the side of the Electoral Act, our guidelines and regulations, and above all the Constitution of the Federal Republic of Nigeria.

“You are hereby deployed to Ekiti as the REC.”

He also refused to speak on the dispute between the Akwa Ibom REC, Mr. Mike Igini, and the All Progressives Congress (APC), saying the commission would not be distracted by baseless allegations.

The APC had accused Igini of conniving with the Edo State governor, Godwin Obaseki, to rig this month’s governorship election in the state.

He said REC had already responded to the allegation and directed his lawyers to initiate legal actions against the person behind the allegation.

“Let me also say this, we stand by our REC. We know the kind of job we are doing.

“On the eve of elections all manner of people come with all manner of accusations to slander officials of the commission and essentially to divert our attention from the onerous task of conducting elections in the country,” the INEC chairman added.