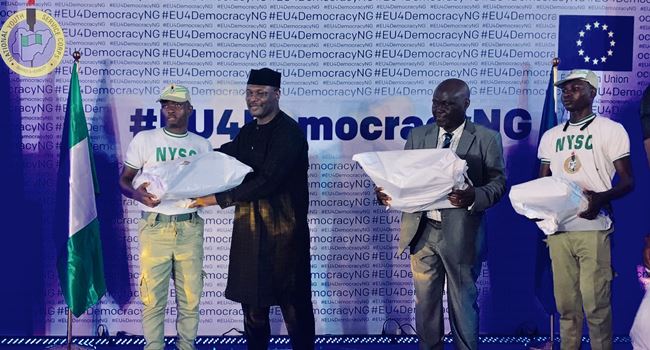 The Independent National Electoral Commission (INEC) has revealed that it will reward each corps member who did excellently well during the last general polls with automatic employment.

That much information was revealed by INEC Chairman Professor Mahmood Yakubu in Abuja on Monday, who also noted that the electoral body will do the needful after reviewing the 2019 elections,

Speaking moments after the donation of laptops and phones used by the European Union Observation Mission (EUOM) to 75 youth corps members in appreciation of their dedication during the 2019 general elections, Prof. Yakubu said the general polls wouldn’t have been a success without the National Youth Corps Service members.

He said; “In addition to what the EU is going to do today by presenting you with these equipment, the commission has embarked on the review of 2019 general elections. There are many of you here and many of you not in this hall, who did very well in the elections. We’ll identify you and reward those who have done excellently in the elections with automatic employment. We extend this beyond the general elections, but to the major elections we’re going to conduct in November: in Kogi and Bayelsa gubernatorial elections as well.

“I said this before and I want to say it again that the youth corps members are the most dedicated, educated, patriotic, willing, able and readily available participants in the elections and even after,” Yakubu added.

The head of the European Union Delegation to Nigeria and the ECOWAS, Ambassador Ketil Karlsen, described youths as the “backbone of democracy as they are key to improving the electoral process in Nigeria.

“We started a very important journey a long time ago. We wanted to make the election process about engaging the youth. More than 60 percent of the Nigerian population voters are youths. For Nigeria to see an improvement in the democratic process, it has to see an increased involvement of youths,” Karlsen stated.