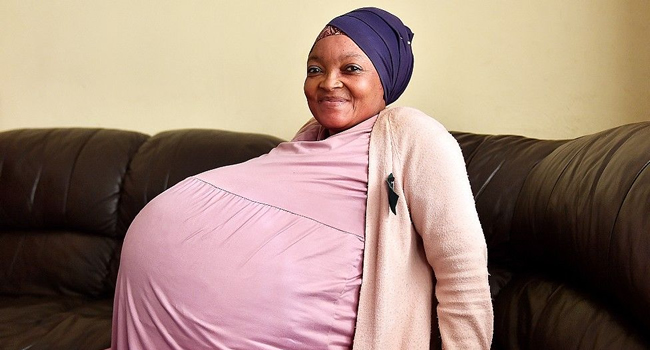 An inquiry into a claim that South African woman, Gosiame Sithole gave birth to 10 babies earlier this month has been discovered to be false.

According to the provincial government, no hospitals in Gauteng province have a record of decuplets being born.

Medical tests show that Ms Sithole had not even been pregnant recently, it said.

The 37-year-old is now being held under the mental health act for observation and will be provided with support.

Independent Online (IOL), the media group which owns the Pretoria News that first reported the story, had stood by its reporting.

Ms Sithole, who has six-year-old twins, and her partner Teboho Tsotetsi lived in Thembisa, a township with many working-class residents in Gauteng province near Johannesburg.

According to IOL, they attended the same church as Rampedi where he was introduced to them in December. In May it is alleged he interviewed the couple who said they were expecting eight babies – a photoshoot shows Ms Sithole looking heavily pregnant.

The birth of a surprise 10 babies was announced by Pretoria News on 8 June quoting Mr Tsotetsi as the source.

Their local mayor then confirmed the births – which is when other outlets, including the BBC, published the story – but a government spokesman later said the politician only had the family’s word and no-one had yet seen the babies.

But the story drew suspicion after Pretoria News initially failed to disclose the hospital where the babies were born and a series of hospitals in Gauteng came out to deny their involvement.

Ten days after the alleged births, IOL made the accusations against SBAH.

The couple seemed to fall out in the aftermath with Mr Tsotetsi reporting her missing and asking people to stop donations a week later, while Ms Sithole accused him of wanting to benefit financially from the babies, the Pretoria News reported.

Meanwhile social workers managed to track down Ms Sithole and she was admitted to hospital for tests last Friday, the Gauteng provincial authorities say.

It went on to allege that Ms Sithole delivered the children on 7 June at Steve Biko Academic Hospital (SBAH) in the capital, Pretoria, saying staff were ill prepared.

It accused the hospital and the provincial health authorities of trying to cover up medical negligence.

“These allegations are false, unsubstantiated and only serve to tarnish the good reputation of Steve Biko Academic Hospital and the Gauteng Provincial Government,” the latest statement said.