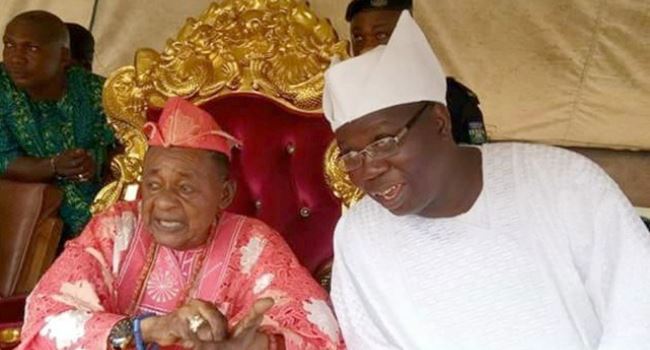 Alaafin of Oyo, Oba Lamidi Adeyemi, and the Generalissimo of Yoruba land, Aare Gani Adams have revealed plans to end insecurity in the region.

The duo spoke at a gathering of Yoruba leaders on Thursday, in Ibadan, Oyo state.

Alaafin, in his comments said traditional rulers are ready to work with President Muhammadu Buhari’s administration to restore peace and unity in the country.

Adeyemi, added that Buhari has been able to achieve what a former president from Yoruba region could not achieve.

He, however urged Nigerians to support President Buhari to rebuild the nation because he cannot do it alone.

The monarch cautioned the people not to blame the president, but support him to achieve the desired results for Nigeria, saying Buhari was doing his best for the nation.

“Stop blaming Buhari, we will work with him to achieve the desired nation.

“We have had our son as the president who never did all we wanted for us,’’ he said.

Chief Gani Adams, the Aare Ona-Kakanfo of Yoruba land, in his presentation, said that the struggle to proffer lasting solution to the increasing rate of insecurity in the region was of utmost priority.

Adams disclosed that all the socio-cultural organisations in the region would come together under a common umbrella, called “Yoruba summit”.

He said that they would relate with the governors and security agencies, as well as foster unity among Yoruba monarchs.

It was reported that the event was attended by Mr Rauf Olaniyan, the deputy governor of Oyo State, several Yoruba Obas, Chief Ayo Adebanjo and prominent Yoruba citizens.