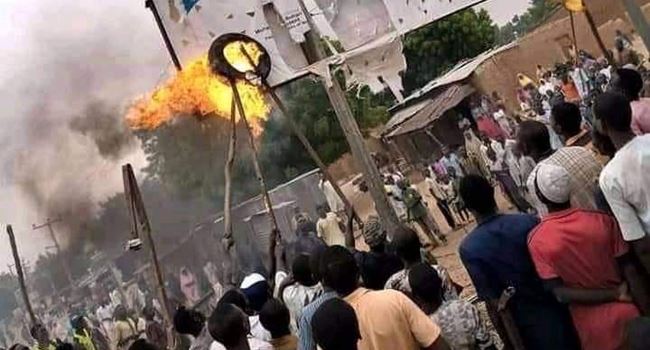 The abduction of two persons in Katsina State has led to wild demonstrations by protesters on Tuesday who shut the Katsina – Kankara Highway and other adjoining roads at Yantumaki in Danmusa Local Government Area of the state.

Billboards of President Muhammadu Buhari and the ruling All Progressives Congress (APC) were also destroyed by the angry protesters who were enraged by the spate of insecurity following the abduction of the two persons in the town.

An eyewitness who declined to be named, said that the irate protesters charged at security agencies to secure the release of the victims; Mansir Yusuf, and his daughter, Fatima, who were abducted by gunmen around 1 am Tuesday.

READ ALSO: ‘Bandits have betrayed our trust’, we’re pulling out of the ‘peace agreement’ —Katsina Gov

Gambo Isah, a Superintendent of Police, who also doubles as the spokesman of the Katsina State Police Command, confirmed the protests triggered by the kidnap incident.

He also assured that normalcy had since been restored by the police and other security agencies in the area.