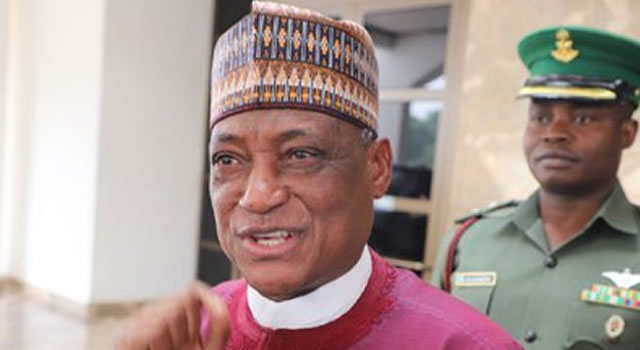 The Minister of Defence, Mansur Dan-Ali has asked for more equipment for the Nigerian military to be able to tackle the various security challenges in the country.

The minister made the demand at a meeting President Muhammadu Buhari had with security chiefs at his office on Thursday.

The minister’s reguest is contained in a brief he presented at the meeting.

The request is coming less than a year after the president made a request for $1 billion for the procurement of equipment for the military to fight the Boko Haram insurgency in the North East.

While request was approved by the National Economic Council, National Assembly and some governors elected on the platform of the Peoples Democratic Party, PDP, kicked and raised eyebrows over the request, with the governors kicking against the withdrawal of the money from the Excess Crude Account.

Read also: I have not made up my mind, Kano Dep. Gov debunks decamping story

Dan-Ali’s brief, signed by the Public Relations Officer of the Ministry of Defence, Colonel Tukur Gusau read in part: “In view of the engagement of troops in various internal security operations across the country the Honourable Minister requested for provision of more equipment for the Armed Forces in order to sustain the tempo in the fight against insurgency and other security challenges across the country.

“In order to forestall future security incidences in Zamfara, Sokoto and Birnin-Gwari axis Operation SHARAN DAJI has been extended to cover up to the fringes of Niger boarder.

“The operation has recently been reinforced with more troops from the Nigerian Armed Forces, Nigeria Police and Department of State Services and is supported by the Intelligence, Surveillance and Reconnisance Wing of 207 Quick Response Group of the Nigerian Air Force.

“The joint operation has successfully arrested some suspected armed bandits and recovered arms and ammunition. Similarly, in order to checkmate the criminal activities along Abuja-Kaduna highway, security agencies have been directed to increase patrols along the axis to address cases of attacks and kidnappings

“There was a review of Operation SAFE HAVEN leading to appointment of a new Commander in the North Central. The Honourable Minister also reiterate the need for the deployment of the Nigeria Police and the Nigeria Security and Civil Defence Corps in all areas liberated by the military in the North-East in order to consolidate on the gains of military operations as well as to enable the military push forward in its clearance operations.

“In the South-South Honourable Minister of Defence informed the council that Operation DELTA SAFE has sustained its operations against illegal activities in the Niger Delta region with resultant reduction in illegal oil bunkering, militancy and pipeline vandalism.”