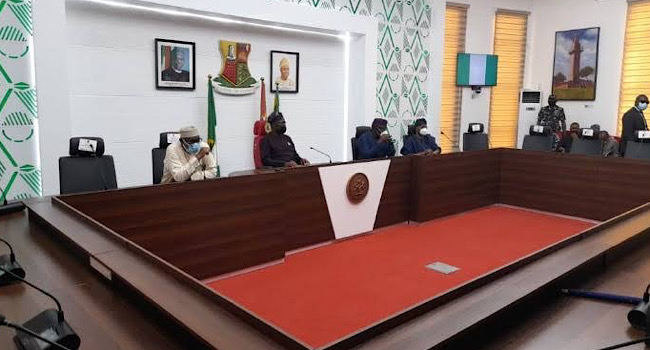 Governors of the South-West states and monarchs from the region met on Saturday in a bid to address the security challenges in the area.

The meeting held in Ibadan, Oyo State was attended by the host governor, Seyi Makinde, and his Ondo State counterpart, Rotimi Akeredolu.

Other governors at the meeting were Kayode Fayemi (Ekiti) and Gboyega Oyetola (Osun).

The traditional rulers in attendance were the Ooni of Ile-Ife, Oba Adeyeye Ogunwusi; Olubadan of Ibadan, Oba Saliu Adetunji; Akarigbo of Remoland, Oba Adewale Ajayi and Olugbon of Orile Igbon, Oba Francis Alao; among others.

Some groups in the South-West had demanded the exit of the Fulani herdsmen from the region.

The call followed the growing killings, kidnappings, and other crimes linked to the herdsmen.

The presidency in its response described the quit notice given to the herdsmen by Ondo State government as unconstitutional.

The Nigeria Governors’ Forum later claimed that Akeredolu was misquoted by a section of the media.

The controversy generated by the quit notice was trailed by violent clashes in many parts of South-West particularly in Oyo State.

At least four persons were reportedly killed during last weekend’s clash between Yoruba and Hausa traders at the Shasha market in Ibadan.

Related Topics:#featuredHerdsmenibadaninsecuritymonarchsSouth West governors
Up Next