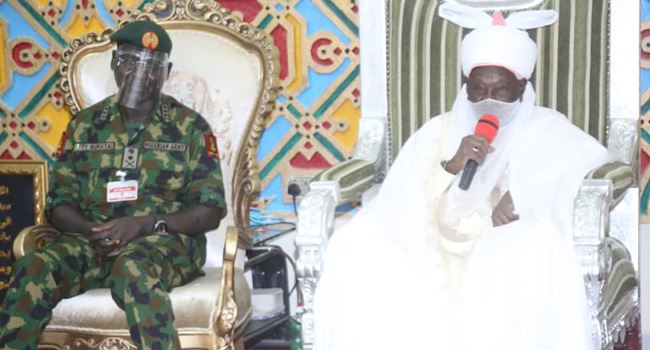 The Emir of Daura, Katsina State, Dr. Umar Farouk Umar, on Monday, lamented the current state of insecurity in the country, describing it as multifaceted security threats that is worse than civil war.

The monarch, who is the emir of President Muhammadu Buhari’s hometown, called for prayers, advice and goodwill of all Nigerians, especially elders, traditional and religious leaders in the country, to overcome banditry and other security challenges the way the civil war was overcome with such prayers without sentiment.

The emir, who also cautioned Nigerians against “undue interference in security matters to avoid distracting the security agencies, spoke when the Chief of Army Staff, Lt. General Tukur Buratai, visited him in Daura.

Buratai, who was in Katsina State on operational visit to Army formations in the state visited, was asked by the emir to use the same approach used in tackling the civil war to tackle the raging insecurity in Nigeria.

According to Dr. Umar, President Buhari took over the reins of power at a time Nigeria was on the verge of collapse, adding that the current situation is like that of spectators who see all the faults in the players but cannot do better if given the chance.

Advising the CoAS to remain resolute, focused and shun distracting comments from any quarter, the emir commended the Nigerian Army and its leadership for the commitment and untiring efforts to contain the myriad of security challenges in Nigeria and in Daura emirate of Katsina State in particular since he took over as the COAS.

In his response, Gen Buratai assured the emir, the emirate council and the people of Nigeria of the renewed vigour and determination of the Nigerian Army to tackle the security challenges in the North-West and the country as a whole.

Related Topics:BuhariBurataiEmir of Daura
Up Next