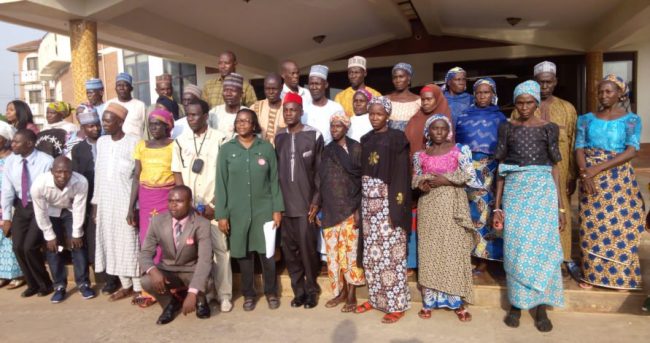 The Chibok parents, comprising 17 women and 13 men, embarked on the visit to plead with Obasanjo to prevail on the Federal government and the International community to expedite action towards freeing their 112 daughters still in Boko Haram captivity.

The parents appealed to Obasanjo to use his regional and global influence and work with the federal government to ensure their daughters were released to reunite with them.

They added that the call became necessary as many of the Dapchi girls had been released by their abductors.

The ex-president who received the parents at the Green Legacy Resort within his Olusegun Obasanjo Presidential Library,(OOPL), expressed confidence in ability of the President Muhammadu Buhari administration to rescue the remaining girls.

Citing bible passages from John 16 verse 33 and James 1 verse 2, he admonished the parents not to despair any longer, saying God who does no evil understands their plight and was capable of bringing succour to them in no time.

Obasanjo also reminded them that as Christians, it should not be forgotten that they would experience tribulations and fiery trials in the world such as the one burdening them since four years now, and said God who allowed it, also had a good purpose for it.

“I want to share with you some of my own thought about the sovereignty of God and what he can do. He is all knowing, powerful and can do anything.

“That is our Lord Jesus talking to his disciples and all of us who are Christians are Jesus disciples. Jesus did not say we will not have Tribulations in the world, he said we will have tribulations, trials and distress. Our faith will be tested.

“Whatever God allows to happen, he allows it for a good purpose, to test our faith and it is in testing of our faith that our character is shaped and strengthened.

“I understand how you feel now, I understand your pain and your anguish, God never does evil whatever happens to strengthen and make us perfect,” he said.

Reading the parents’ speech, one of the parents, Mr Yakubu Nkeki, appealed to Obasanjo to “ginger” the Federal Government and world leaders to bring their “daughters back from captivity.”

Nkeki lamented that in about a month’s time, it would be four years since a total of 276 Chibok school girls were abducted, saying that while 162 of them had been set free, 112 others – who are their children, still remained with the terrorist sect.