Home » Latest » Intrigues and power play as Giadom, Ajimobi, others battle for soul of APC 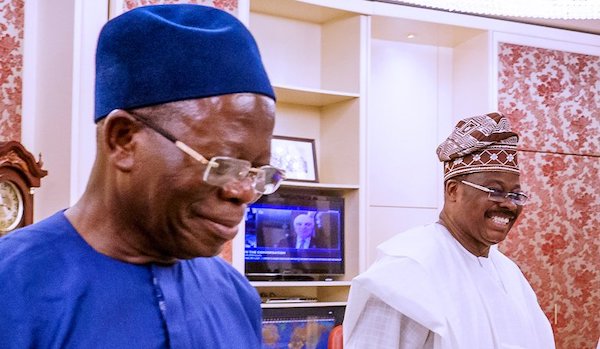 The intrigues and power play in the All Progressives Congress (APC) reached a crescendo on Wednesday after the party’s National Working Committee (NWC) ratified the appointment of former Oyo State governor, Abiola Ajimobi, as acting National Chairman.

The NWC also disowned the Deputy National Secretary of the party, Victor Giadom, who had been pushing to be named in that capacity, insisting that his membership of the committee ceased when he resigned to contest the 2019 election as running mate to the party’s governorship candidate in Rivers State.

The APC National Vice-Chairman, (South-South), Hilliard Eta, who addressed journalists after the meeting, said preparations for the Edo State governorship primary was on course.

The implication is that the Ajimobi-led NWC had upheld the disqualification of Edo State Governor, Godwin Obaseki, from next week’s governorship primaries in Edo State.

However, a fresh twist appeared in the unending APC saga after a report emerged that the ex-Oyo State governor was currently incapacitated and as such could not act as the party’s chairman.

A former Minister of Aviation, Femi Fani-Kayode, said on Wednesday morning that Ajimobi was bed-ridden and had reportedly gone into a coma.

Obaseki, who resigned his membership of the APC on Tuesday, had promised to make public his next political move within 48 hours.

However, the ruling of the Court of Appeal which affirmed the lower court’s suspension of Adams Oshiomhole as national chairman of APC a few hours after the governor announced his intention to quit the party, may have forced him to delay the announcement of his next political move.

The thinking in Obaseki’s camp, it is reported, is that Giadom, who had publicly rejected the verdict of the APC screening panel which disqualified the governor from the governorship primaries in Edo State, would take over as the party helmsman following the suspension of Oshiomhole.

Although Obaseki had reportedly agreed to join the Peoples Democratic Party (PDP), the rumoured interest of the party’s immediate past chairman in Edo State, Chief Dan Orbih, in the governorship race, is another reason the governor is bidding his time on the matter.

Orbih, according to insiders in PDP, is a very powerful figure within the party and has a huge support base in Edo, particularly at the grass roots.

Giadom is very close to the Minister of Transport, Rotimi Amaechi, Kaduna State Governor, Nasir El-Rufai and few other governors in the Progressives Governors’ Forum who had in the past, expressed reservations about the leadership style of the now-suspended Oshiomhole.

The NWC under the ex-Edo State governor suspended the former Imo State governor, Rochas Okorocha, his Ogun State counterpart, Ibikunle Amosun, Ondo State governor, Rotimi Akeredolu and the Director-General of the Voice of Nigeria (VON), Osita Okechukwu, among others, for alleged anti-party activities a few months before the 2019 general election.

Although the aforementioned party stalwarts were later recalled by the party, the general misgiving caused by that suspension has refused to go away and there is widespread belief that the affected party stalwarts will stop at nothing to get Oshiomhole out of the picture before the 2023 general election.

There is also the interest of the national leader of the party, Bola Tinubu, at play. Tinubu, a staunch backer of Oshiomhole and Ajimobi, is said to be positioning himself for a 2023 run on the party’s platform.

It remains to be seen how things ultimately pan out.