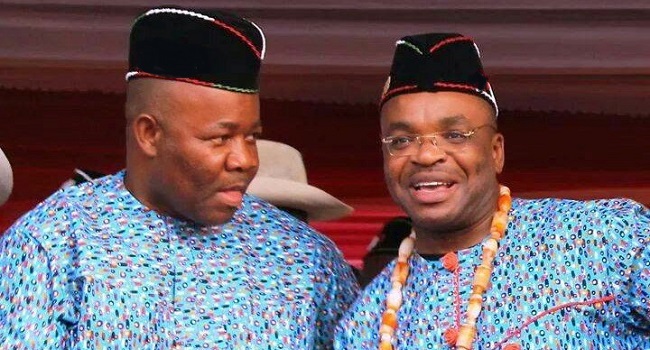 The development comes on the eve of the presidential and National Assembly elections.

Godswill Akpabio, a former governor of the state, is contesting the election in Akwa Ibom north west senatorial district.

Akpabio who fell out with Udom Emmanuel, the governor, after defecting from the Peoples Democratic Party (PDP) to the All Progressives Congress (APC), has been changed the political equation in the state.

Charles Udoh, commissioner for information, wondered why the Akwa Ibom government house was singled out for such in the entire Niger Delta region.

He called on President Muhammadu Buhari to restore all security apparatus deserving of the governor, at a “crucial time like this”.

“The Nigerian Army has withdrawn all forms of security protection from the Akwa Ibom State Government House. This directive which has already been enforced signals an all-time low in the history of the democracy in Nigeria,” Udoh said in a statement.

“It is inconceivable that Akwa Ibom Government House has been singled out in the Niger Delta region, as a focal point for such an ill-advised action at a crucial time like this..

“Recall that recently, the immediate past Police Commissioner in the state had also shown visible signs of partisanship against the state government, which nearly resulted in a constitutional crisis in the state.

“Despite this blatant act of intimidation, the Government and people of Akwa Ibom state remain resolute in the quest to protect democracy and the rule of law without compromising the air peace, enjoyed in the state.”

#NigeriaDecides: West Africa is looking up to you, ECOWAS delegation tells Nigeria