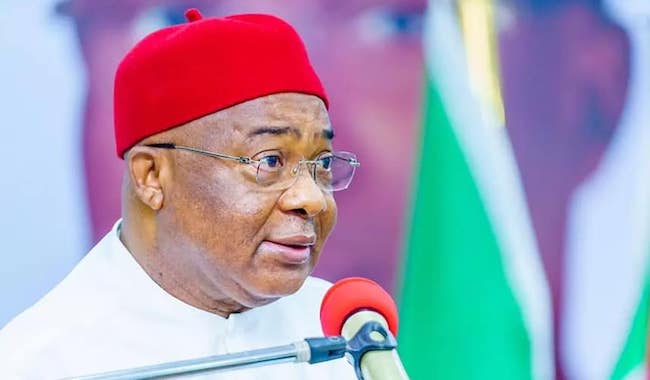 ﻿The Ebubeagu security group has come under fire from the Indigenous People of Biafra (IPOB) for the murder of seven wedding guests in Imo State.

Ebubeagu was referred to by IPOB as an imported terrorist organization that had been sent to terrorize the South-East.

Powerful claimed that the majority of the massacres carried out in the South-East were intended to demonize IPOB, in a statement he signed on Wednesday.

The statement read, “We, the global family and movement of the Indigenous People of Biafra (IPOB), under the command and leadership of our great leader, Mazi Nnamdi KANU, condemn in unequivocal terms the atrocities happening in Imo State. All these atrocities are perpetrated by Hope Uzodinma’s political thugs, which he created to attack his political opponents and demonize IPOB.

“IPOB realized and understood that Supreme Court Administrator of Imo State, Hope Uzodinma, was sent by those who magically made him a governor from the fourth position to the first position after the election to depopulate Imo Youths.

“Continuous killings in Orlu, and Oru East/West LGAs of Imo state by Hope Uzodinma’s militias is disturbing. Hope started by bringing in Nigeria Army into Orlu LGA, creating pandemonium and tension in Imo State before creating Ebubeagu to solidify his wicked actions against his people. He started and renewed the kidnapping and slaughtering of Imo State citizens.”

It was widely reported on Monday that gunmen suspected to be operatives of Ebubeagu Security outfit allegedly killed seven wedding guests in Awomama, Oru West Local Government Area of the state.

The incident happened on Sunday while the victims were returning to their village in Otulu in Oru East LGA before the gunmen opened fire on them.
The President General of Otulu community, Nnamdi Agbor, told newsmen that seven persons died on the spot while others were missing.

The community leader confirmed that the victims were on their way home when the gunmen opened fire on them.

But contrary to claims by community leaders, the Imo State Governor Tuesday branded those killed by the Ebubeagu as bandits.

He said in a statement issued by his Chief Press Secretary, Oguwike Nwachuku, that claims that the victims were wedding guests was propaganda.