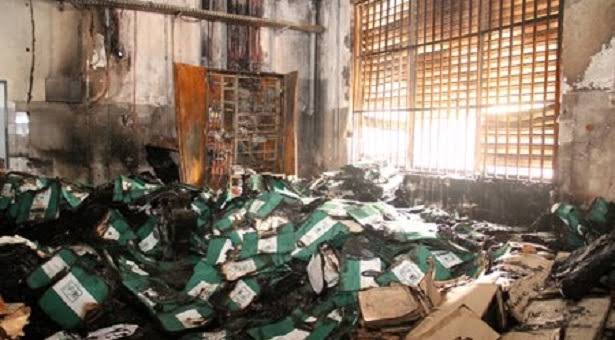 The Independent National Electoral Commission (INEC) was recently attacked, but the Indigenous People of Biafra (IPOB) denies being responsible, despite Nigerian police’s accusations.

The organization stated that it was “not interested in this Nigeria’s future elections in 2023” and accused the police of extortion.

The Eastern Security Network and IPOB militants, according to the Imo State Police Command, were the shooters that assaulted the INEC office in the Oru West local government on Sunday.

The facility of the electoral commission was attacked using improvised explosive devices (IEDs), according to state police spokesperson Mike Abattam.

Emma Powerful, the media and publicity secretary for IPOB, responded on Monday by claiming that the Nnamdi Kanu-led organization was not involved in the attack.

“We, the Indigenous People of Biafra (IPOB) under the leadership of Nnamdi Kanu wish to disassociate ourselves from the recent attacks on the INEC office in Owerri Imo State.

“Neither IPOB nor ESN operatives has anything to do with Nigeria’s elections in 2023. We have never supported nor involved ourselves in any election obstruction or violence as a movement.

“As of today, IPOB is not interested in Nigeria and its electoral activities and has never asked anyone to carry out any attack on our behalf.

“Nigeria Government and her security agencies are working day and night to blackmail IPOB’s self-determination movement. There has never been any time that Nigeria Police carried out any public inquiry on all the numerous attacks and arsons that they blamed IPOB for.”

“ESN operatives never attacked the INEC office because we are not interested in this Nigeria’s forthcoming election in 2023. Those attacking INEC facilities are working to blackmail IPOB,” the statement reads.