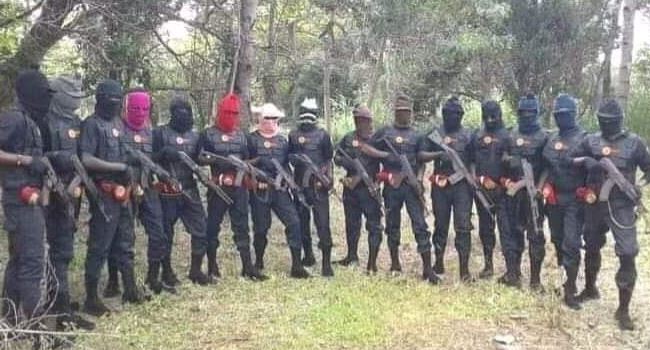 The proscribed Indigenous Peoples of Biafra (IPOB), has dissociated the group from the purported killing of six children in Anambra State, describing the allegation as not only malicious but mischievous.

In a press statement signed by IPOB’s Media and Publicity Secretary, Emma Powerful, on Wednesday, the group said “it’s ridiculous to link IPOB and ESN with the killing of children in Anambra State,” adding that mischief-makers were behind the report which it claims to be falsehood.

In the statement, IPOB wondered why the group whose mandate is to defend the people of the Eastern region against terrorists, would turn against the same people they stake their lives to protect and kill them.

“The attention of the Indigenous People of Biafra (IPOB) ably led by our great leader, Mazi Nnamdi Kanu, has been drawn to a malicious and mischievous media report trying to link the IPOB and the Eastern Security Network (ESN), with the purported killing of six children in Anambra State.

“Fabricated claims like this are only akin to giving the dog a bad name in order to hang it. Those behind this lame and poorly scripted dummy stupidly forgot the main reason for the establishment of ESN and the mission of IPOB.

“We came to save lives and not to waste them. We don’t kill those we daily put our lives on the line to save and protect. Associating us with such a barbaric act is not only insulting but a lie from the pit of hell.

“But for the sake of the gullible, we wouldn’t have bothered to signify distracting and foolish reports like this with a response. And this will be the last time we will respond to trash like this. We have no hands in the purported incident.

“We also want to debunk the lies by the Nigeria military that those it arrested in Orlu during their genocidal raid and airstrike last week are ESN operatives.

“We equally want to warn the Nigerian military to ensure nothing happens to the Jewish Rabbi, Kelechi Nwachukwu, and his family as well as other IPOB members they arrested out of frustration following their humiliation by the indomitable ESN operatives at Orlu.

“We must warn the Nigeria military as well as Hope Uzodinma, to ensure that nothing happens to these IPOB members and 33 synagogue worshipers arrested in Orlu and paraded in the public as if they were criminals.

“Hope Uzodima should be ashamed of himself for masterminding the killing and persecution of his unarmed people at a time his fellow Northern governors are openly negotiating with armed bandits and terrorists.

“While the Northern leaders are busy facilitating amnesty for mass murderers, Hope Uzodinma and his fellow traitors in the South East are sponsoring the destruction of their own people. But these saboteurs and Fulani slaves in our land must reap the fruit of treachery!”

Related Topics:AnambraipobNigeria Army
Up Next