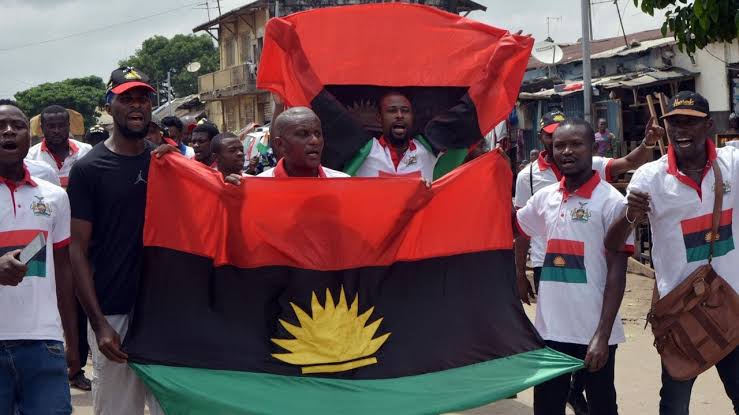 Proscribed Igbo separatist group, Indigenous People of Biafra (IPOB) has disowned a 22-year-old female executioner who has been trending on social media, saying she is neither a member of the group or its militia wing, the Eastern Security Network (ESN).

The alleged female executioner identified as Amaka Onah, was reportedly arrested by the Nigerian Army in an operation in Enugu State, and described as a deadly executioner for the group.

But in a statement issued on Thursday by its Media and Publicity Secretary, Emma Powerful, IPOB accused the Federal Government, the Nigerian Army and other government owned security agencies of what it term a poorly scripted ‘Nollywood’ movie meant to discredit the group and the ESN.

The statement from the group reads:

“From the so-called confessional statement of the purported female executioner, she claimed to have joined ESN four months ago, shows that she was handed a very poor script because IPOB stopped the recruitment of ESN operatives since 2020 before our leader formally inaugurated ESN in December 2020.”

“As the Media and Publicity Secretary of IPOB, I have written several press releases informing the public and those who may be concerned that ESN does not have any camp in Enugu Ezike.

“Moreso, Mazi Chinasa Nworu, in more than one of his Radio Biafra programmes anchored by Mazi Chinedu Jonathan, publicly said ESN has no camp in the Enugu Ezike, in Enugu State.

“If, for the sake of argument, any camp exists in this locality, then that must be one of those camps set up by the Nigerian government collaborators to carry out its evil bidding with the sole objective to blackmail IPOB as in this ludicrous instance of a so-called female executioner.

“The people of Igboeze North and South know very well that IPOB has no base in their locality.

“The caricature of the so-called female executioner, if it is real, shows clearly that the girl is working with the Nigerian government collaborators to impersonate ESN in Enugu Ezike.

“A cursory observation of the female executioner in question with her hairstyle tells discerning minds all they need to know. IPOB repudiates every attempt by the Nigerian government through its sponsored collaborators.

“Nigerian government should know by now that IPOB can neither be blackmailed nor be intimidated by the ‘Nollywood’ movies they are acting because they are very predictable and we know their game plans even before they execute them.

“We have always maintained that ESN created by the IPOB leader does not get involved in any form of crime. They are disciplined and dedicated men and women who volunteered to safeguard our land against marauding, invading terrorists in our forests and farmlands pretending to be herdsmen. They protect our people and do not harm them.

“IPOB and ESN abhor any form of criminality generally but more especially in our territory. Crime is not on our agenda. Our agenda remains unchangeable, and we must achieve it by the grace of God Almighty Chukwu Okike Abiama, who controls the universe. Our sole aim is to ensure that Biafra’s freedom is achieved in a peaceful and universally recognized democratic process called a referendum.

“We, therefore, state that anybody linking IPOB and ESN to any form of criminality must be under the influence of drugs or just doing the dirty blackmail job for the Nigerian government.

“IPOB will not succumb to their sponsored blackmail and propaganda. We have come a long way and cannot be distracted by cheap blackmail on this clarion call to restore the Biafran sovereign nation.”