Home » Politics » IPOB kicks against Operation Python Dance in Southeast, says there is no insecurity 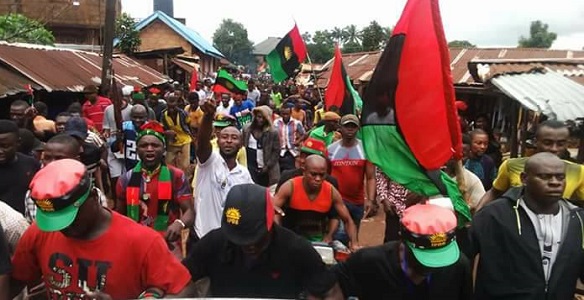 The proscribed Indigenous People of Biafra (IPOB) has kicked against Operation Python Dance 4 planned by the Nigerian Army in the Southeast geopolitical zone, insisting that there is no insecurity in the region to warrant such an operation.

According to secessionist group, what appears like insecurity in the region are the activities of “land- grabbing Fulani terror herdsmen” made possible by leaders of the region.

The group stated this in a statement on Saturday by its Media and Publicity Director, Emma Powerful, adding that the Nigerian Army should instead focus on the North-East almost ravaged by activities of Boko Haram and other forms of insurgency.

According to IPOB, the consistent re-launch of OPD showed that the army had only resorted to fighting defenceless Nigerians instead of protecting the nation’s territorial and external borders.

“There is no insecurity in the South-East save for those introduced by land-grabbing Fulani terror herdsmen, aided by the region’s governors.

‘‘Exposing and making sure the whole world knows about the evil plans of the Nigerian government and its security agencies against the people of Biafra is our responsibility and that we shall continue to do”, the group said.