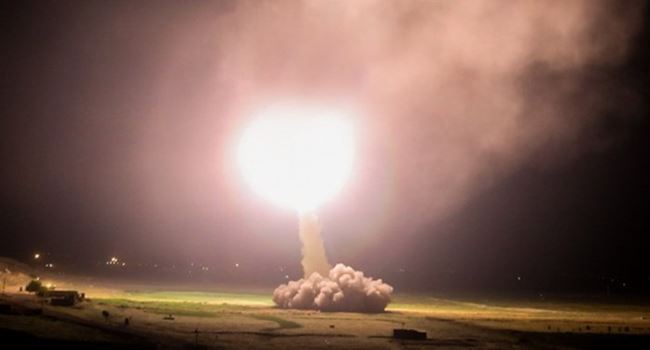 In what may signal the beginning of hostilities in the Middle East, Iran fired at least 22 ground to ground missiles at the United States military bases in Iraq on Wednesday, in obvious retaliation for the killing of its top military commander, Qassem Soleimani.

The Iranian state television said in the early hours of Wednesday that the Revolutionary Guards Corps had attacked Ain al-Asad military base, where US troops are stationed. A second facility near Erbil airport was also hit.

The Iraqi military also said in a statement that 22 missiles were launched on the two sites between 1:45 a.m. and 2:15 a.m., adding that two of the 17 missiles targeting Ain al-Asad base did not go off, while the five missiles on Erbil all targeted coalition headquarters.

The Iranian Foreign Minister, Mohammad Javad Zarif had told CNN that Tehran would retaliate the US killing of Soleimani proportionately.

He also said on his Twitter handle that Iran had taken and concluded “proportionate measures in self-defence” under Article 51 of the UN Charter.

“We do not seek escalation or war, but will defend ourselves against any aggression,” he said.

Reacting to the missile attacks, President Donald Trump also tweeted late on Tuesday that an assessment of casualties and damage from the strikes was under way.

“All is well!” Trump said in the Twitter post, adding that he would make a statement on Wednesday morning.

The state television said at least 80 “American terrorists” were killed in attacks involving 15 missiles, adding that none of the missiles were intercepted.