Home » International » Iran & Israel engage in war of words, threaten to attack each other 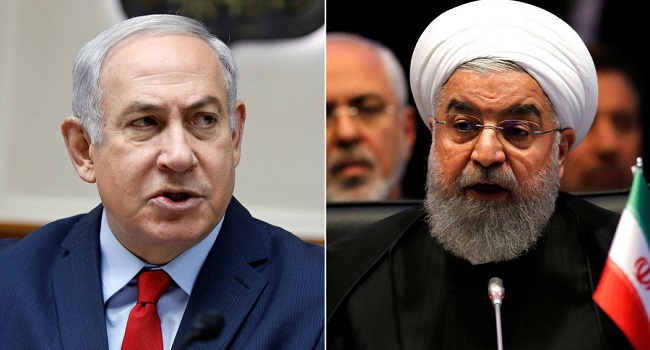 Regional rivals, Israel and Iran are involved in a war of words and have both threatened to attack each other as the Islamic Republic celebrated the 40th anniversary of its revolution.

The first barb was fired by a commander from the Islamic Revolutionary Guard Corps (IRGC) who threatened to destroy the Israeli cities of Tel Aviv and Haifa if the United States attacks Iran.

“The US should know that we would raze Tel Aviv and Haifa to the ground in the event of a military attack on us,” General Yadollah Javani, head of the guard’s political bureau, was quoted as saying.

The comments provoked a strongly worded response from Israel as Prime Minister Benjamin Netanyahu who was quick to respond saying later on Monday it would mark Iran’s last revolution anniversary if it attacked any cities in Israel.

“I don’t ignore the threats from the Iranian regime, but I’m also not intimidated by them,” Netanyahu said in a Hebrew-language video.

“If this regime makes the terrible mistake and tries to destroy Tel Aviv or Haifa, it won’t be successful and it will be the last anniversary of their revolution they will ever celebrate.”

The development comes a day after scores of Iranians thronged the streets of Tehran and other parts of the country marking the 40th anniversary of the triumph of Ayatollah Ruhollah Khomeini, the Shi’ite cleric who toppled the Shah in an Islamic Revolution.

Reports say Iranian nationals were seen carrying their country’s flag while chanting “Death to Israel, Death to America,” trademark chants of the revolution which ousted the United States’ most important ally in the Middle East.

Others were busy burning U.S. flags while a protester was seen carrying a banner with the inscription which reads thus; “Much to the dismay of America, the revolution has reached its 40th year.”