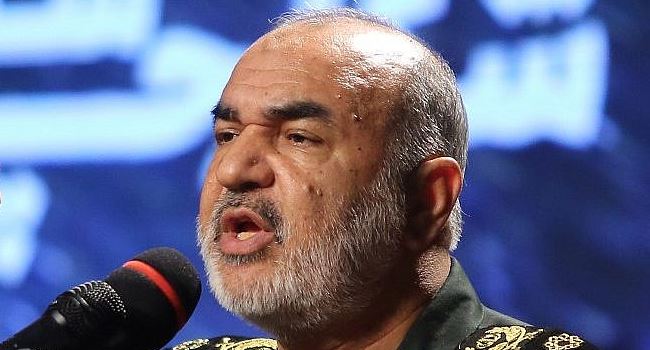 The commander-in-chief of the Islamic Revolutionary Guard Corps (IRGC), Major-General Hossein Salami has vowed to avenge the death of Qassem Soleimani (widely believed to be the second most powerful man in Iran) who was killed in a US drone strike in Iraq.

In a statement on Saturday, Major-General Hossein Salami doubled down on a threat to avenge the US killing of Qassem Soleimani in an early January attack.

“Our revenge for the martyrdom of our great general is certain. It is serious. It is real,” Major-General Hossein Salami said in a speech, directly addressing US President Donald Trump.

“We will hit those who were directly or indirectly involved in the martyrdom of this great man.”

Recall that after the attack, Iranian Supreme Leader Ayatollah Ali Khamenei promised “harsh revenge” for the perpetrators, a promise that Iranian officials have reiterated since.

This came after the government of Iran has warned the United States of America against making what it termed a “strategic mistake” after President Donald Trump threatened Tehran over reports it planned to avenge the killing of top general Qassem Soleimani.

The warning was issued during a televised news conference on Tuesday by Iran’s government spokesman Ali Rabiei who said; “We hope that they do not make a new strategic mistake and certainly in the case of any strategic mistake, they will witness Iran’s decisive response.”

The President of the United States of America, Donald Trump had vowed a response that will be “1,000 times greater in magnitude,” to any attack by Iran on its citizens in South Africa.