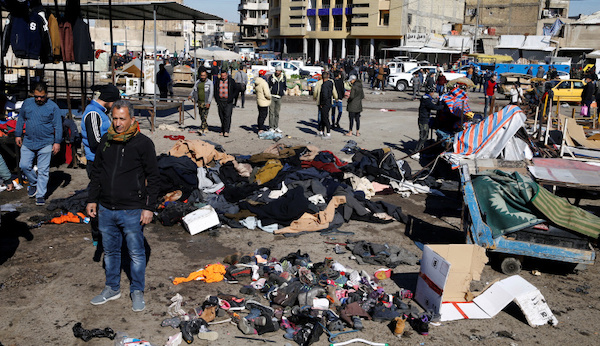 ISIS has been accused of culpability in the deadly suicide bomb blast which ripped through a crowded market in Bagdad on Thursday, with death toll from the incident now rising from 28 to 32.

Speaking after the attack today, Sajad Jiyad, an Iraq analyst and fellow at The Century Foundation think-tank, said the twin suicide bombings bore traces of ISIS.

Jiyad said; This kind of attack bears the hallmark of ISIS [ISIL] who have targeted crowded civilian areas in Baghdad with suicide attacks many times in the past.

“This shows a security failure by the government who have been warned that ISIS is still active and in recent days have seen it target infrastructure and rural areas with similar attacks.

“For Iraqis, this is a worrying development which saps confidence in the security forces and adds to the level of tension already present with geopolitical, economic and pandemic issues,” he added.

The health ministry said the capital’s hospitals were being mobilised to treat over a hundred victims wounded after the explosion.

‘We need restructuring of the mind, not just the country’ – Jonathan

Wife of journalist killed by police demands justice for husband