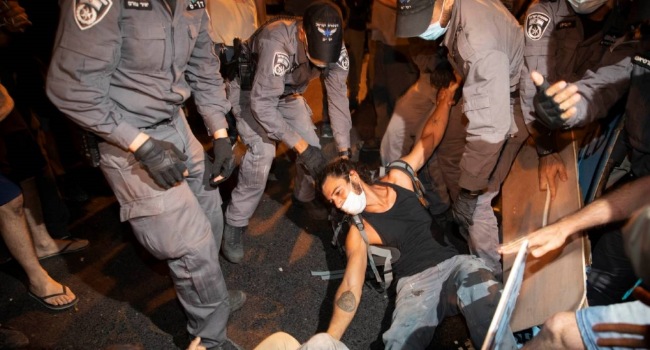 Violent demonstrations have continued outside the official residence of Prime Minister Benjamin Netanyahu as demonstrators decry the country’s high cost of living and its handling of the COVID-19 pandemic.

Reports say local police had a torrid time controlling protesters who thronged the streets of central Jerusalem, as weeks of protests against the Israeli leader appeared to be gaining steam.

Thousands of demonstrators have taken to the streets, calling for Netanyahu to resign, protesting his handling of the country’s COVID-19 crisis and saying the Prime Minister should not remain in office while on trial for corruption charges.

According to reports, demonstrators hoisted Israeli flags and blew loud horns as they marched. Many held posters that said “Crime Minister” and “Bibi Go Home” or accused Netanyahu of being out of touch with the public.

However, Netanyahu has dismissed the demonstrators as “leftists” and “anarchists.”

Late on Saturday, his Likud party issued a statement that accused Israel’s two private TV stations of giving “free and endless publicity” to the protesters and exaggerating the importance of the gatherings.