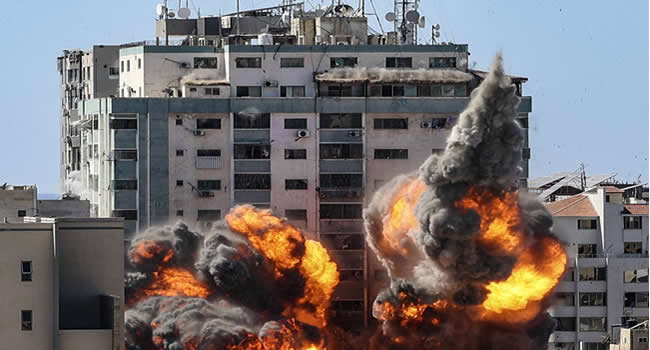 The Israeli Air Force (IAF) has said it demolished the building housing the Associated Press (AP), Al Jazeera, and other media firms in Gaza because the Hamas terror organisation uses it as a human shield.

IAF said in a statement on Sunday the Hamas deliberately places military targets at the heart of densely populated civilian areas in the Gaza Strip.

IAF said before the strikes were launched, it warned civilians in the building in advance to evacuate the building and allowed sufficient time for them to leave the site.

The statement read: “A short while ago, IAF fighter jets struck a multi-story building which contained military assets belonging to the intelligence offices of the Hamas terror organization.

“Before the strike, the IAF provided warning to civilians in the building and allowed sufficient time for them to evacuate the site.”

Also, IAF said its Iron Dome Air Defense System intercepted approximately 1,150 rockets, and in response, its fighter jets and aircraft struck over 90 Hamas and Islamic Jihad terror targets throughout the Gaza Strip over the last 24 hours.

Among the targets struck were the residences of Yahya Sinwar, Chairman of the Hamas Political Bureau in Gaza, and that of his brother, Muhammad Sinwar, Head of Logistics and Manpower for Hamas, in Khan Yunis.

According to the Force, both residences served as military infrastructure for the Hamas terror organisation.