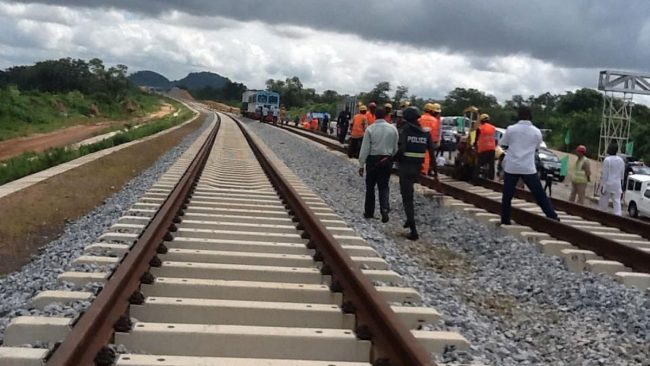 The Minister of Transportation, Rotimi Amaechi, has assured Nigerians that based on the pace of work being carried out, the Itakpe-Warri and Lagos-Ibadan rail projects would be completed in 2018.

He made this known when he briefed State House correspondents after a closed door meeting with President Muhammadu Buhari at the Presidential Villa, Abuja, on Tuesday.

According to the minister, much progress was being made in the revamping of rail transportation network across the country.

He disclosed that laying of tracks on the Lagos-Ibadan route would commence next month, and expressed the hope that the project would provide a lot of job opportunities to Nigerians.

“If the rain doesn’t start early we will start laying tracks on the Lagos-Ibadan route in April and hopefully we believe we can complete it in December or January and open it up for passengers and business and we expect about 6, 000,000 tons of cargo out of the 30,000,000 tons of cargo that we have between Lagos and Kano.

“In terms of job creation, you can be rest assured that it will be in thousands,” he said.

On Itakpe-Warri rail project, Ameachi said the project was being reconstructed and expressed the hope that it would be inaugurated by August.

He said, “The tracks were already there but they were vandalised so we are rebuilding those tracks and then building new stations.

“We are also reconstructing a yard that was abandoned.

Read also: Nigerians must understand that our economy is not a ‘normal’ one- Osinbajo

“All things being equal, the place should be ready soon, we gave them May as completion period but let’s say by August we should be commissioning.’’

Amaechi also disclosed that President Buhari has approved that negotiation should be carried out for $15 billion loan for the completion of work on the Port Harcourt-Maiduguri rail project.

According to him, the president has also given the approval for negotiations of funds for the execution of Lagos-Calabar rail project to ensure its speedy completion.

“We are almost concluding negotiations for the Port Harcourt – Maiduguri. We are looking at the cost – is in the neighbourhood of between 14 billion and 15 billion dollars.’’

The minister reassured that adequate steps had been taken to guarantee safety of passengers aboard rail transportation in the country.

“There are policemen in all the coaches that ply our routes. So if the passengers are attacked by armed robbers, they will report while they take action,” he said.