Home » Life's Blog » Its a joke! My marriage still intact, comedian Seyi Law says as he apologises for misinformation 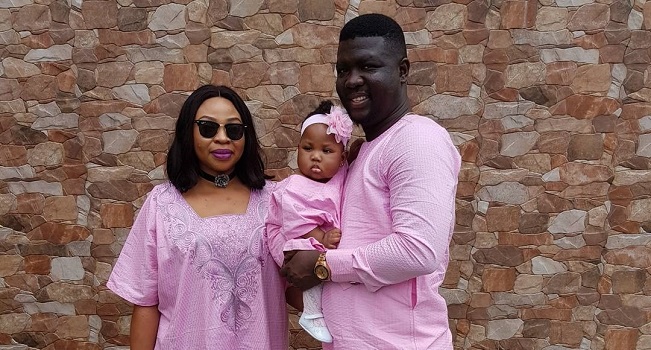 Comedian Seyi Law has refuted the bombshell announcement he made on his Instagram page in the early hours of Sunday claiming that he had parted ways with his wife Stacy Ebere.

The comedian had earlier taken to the social media platform announcing to his followership on Instagram that he was parting ways with his wife of eight-years over irreconcilable differences.

Sharing the news about the decision to go their separate ways, which he has now apoligised for describing it as an expensive joke, Seyi Law wrote saying;

“Due to irreconcilable differences would have been enough to announce this, but the kind and beautiful heart of my ex-wife must be stated. She is one of the best women I have ever known.

“It is however sad, that I announce that my wife and I have decided to path ways for good. We will appreciate your love and support at this time. God bless you. Tiwaloluwa is safe and good.

The comedian hours later confirmed that his earlier message was a huge joke and informed that he used the message which he has now debunked to promote his forthcoming show set to be staged in the UK.

He wrote on his Instagram page; “Human beings love bad news sha. I have been promoting my shows since, very few talks. Abegi, I dey UK for media rounds.

“My wife and I are intact. Kai people can’t even read between the lines. I said PATH WAY, not part way. My Ex-wife, abeg which one.

“Please help me spread this one like the fake news. I need to sell tickets. I am sorry, the joke is too expensive,” he added. 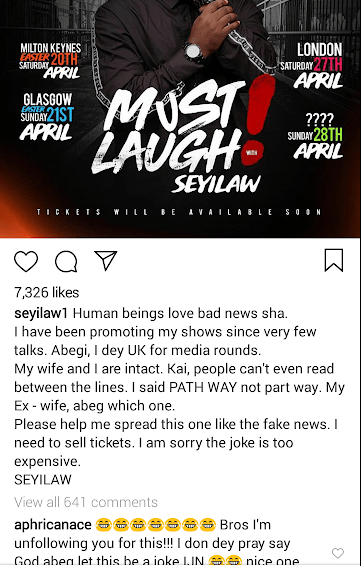