Home » Politics » It’s ‘an insult’ to have expected Buhari to debate; he owes Nigerians no explanation- APC 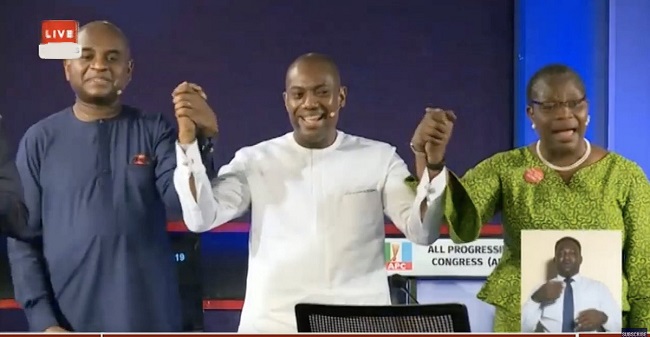 Lanre Issa-Onilu, spokesman of the All Progressives Congress (APC), says President Muhammadu Buhari owes no one any explanation for not attending the presidential debate.

The debate which held on Saturday was organised by the Nigeria Elections Debate Group (NEDG) and the Broadcasting Organisations of Nigeria (BON).

President Muhammadu Buhari was not in attendance. A statement from his campaign council said the president could not attend the debate because of a clash with his hectic schedule.

Atiku Abubakar, presidential candidate of the Peoples Democratic Party (PDP), who came to venue, also refused to participate in the debate, later citing the absence of the president.

Speaking with journalists on Sunday, Issa-Onilu said the debate was only important to those seeking power.

“The president does not have to give reason for now attending that debate,” he said.

“Let me reiterate like I have said earlier, the debate is just one of several platforms for our candidate to engage with the public. We pick the platforms that are impactful and we are the one to determine which one we want to use.

“That particular debate could be important and I think it is important to those seeking power not somebody who has has a lot speaking for him already.”

According to Issa-Onilu, the PDP presidential candidate “covertly” ran away.

“It is a pointer that that a man seeking our mandate has nothing to offer,” he said.

“They have not been able to present to us evidence of their meeting with anyone of note,” he said.