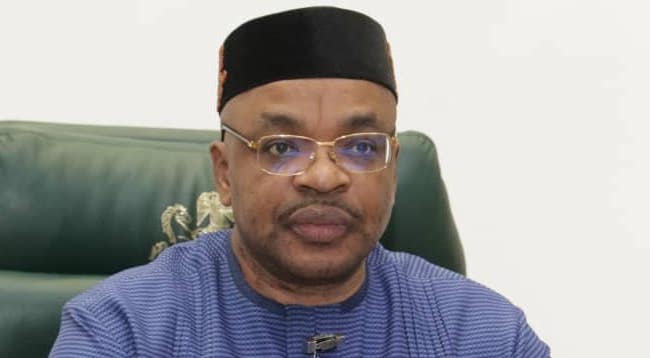 In the continued wrangling in the Peoples Democratic Party (PDP), Governor Udom Emmanuel of Akwa Ibom State, on Thursday, said it was not proper to renege on promises.

The Governor, who featured in a Channels TV interview, Sunrise Daily, apparently faulted the failure of the National Chairman of the opposition, Iyorchia Ayu, to step down as promised.

However, upon the emergence of Atiku Abubakar as the standard bearer, the National Chairman seemed to have reneged on his promise, by refusing to step down from office.

This development had thrown the party into crisis as some Southern members had demanded the resignation of the chairman in the interest of fairness and equity.

This had also led to the withdrawal of Governors Nyeson Wike of Rivers State, Seyi Makinde of Oyo state and other members from the Atiku’s presidential campaign activities.

Speaking in the interview, Governor Udom noted that unkept promises exacerbated the crisis.

He, however, maintained that the ongoing fisticuffs would be resolved ahead of the 2023 elections, adding that no members of the party would be denigrated in the struggle.

He said: “If you promise to do something, do it. It is good to keep promises. PDP is a family and we’ll resolve the crisis in earnest. In the course of the campaigns, we would work out the solutions. It’s good to listen to people’s complaints and attend to them effectively. We sensationalise issues too much in this country.

“We’ll come out and sort things out to win 2023 elections. We can’t ignore any dissenting voices. Nobody will be ignored. We take up the issue head on and resolve it. The earlier we keep to promises as a country, the better for us. Let’s do things that are expedient to the peace and prosperity of the country.”