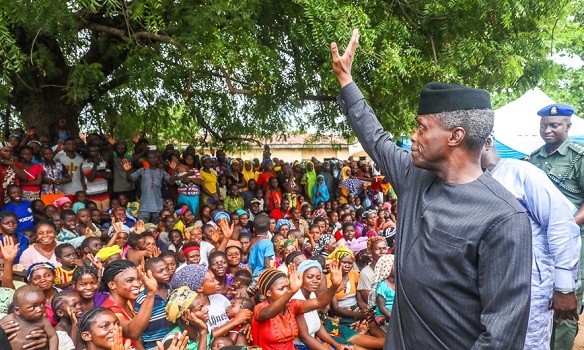 The Vice President, Yemi Osinbajo, has restated the federal government’s determination to ending the killing of farmers by suspected herdsmen in parts of the country.

Osinbajo gave the assurance during an assessment visit to Internally Displaced Persons (IDPs) camp in the Awe Local Government Area of Nasarawa State on Wednesday.

He said that he would be meeting with the governors of Benue and Nasarawa States along with their security councils to fashion out ways of ensuring permanent peace in the troubled areas.

“Although the problem has been age-long but no matter how long anything continues it must end one day and by the grace of God this will come to an end now.”

He assured the displaced people that the federal government would also ensure that they returned to their homes safe and secure.

“The reason we are meeting today is to look at how you will return home and be settled in safety.

“I know that being in an IDP camp is not good for anybody at all. Children have to go to school, adults have to go to their farms and others to their trades.

“It is our duty as a government to make sure that everyone is safe to do their work in peace and comfort.”

Osinbajo said the federal government had taken measures to ensure that the IDPs were made comfortable, pending their return to their homes.

“I came here with the Director-General of the National Emergency Management Agency (NEMA) and the Executive Secretary of the refugees’ commission to ensure that in the next few days, more relief material are provided to cushion your plight.

“The DG of NEMA has just informed me that some of the relief material are already in Lafia for onward transportation to the various camps.”

He said further that government would assist the IDPs to rebuild their homes and to put their farms and other trades destroyed by the herders back on stream.

Earlier, Governor Umaru Al-Makura recalled that although the farmers-herders crisis was age-long and had always been settled amicably by both parties over the years, the recent dimension, where parties started bearing rifles and other weapons was worrisome.

Al-Makura said the current crisis, which led to over 25,000 people displaced in Nasarawa State was a fallout of the anti-open grazing law, implemented by the Benue Government.

He said that the state government had been working assiduously with security agencies and other stakeholders to ensure peace and bring succour to displaced persons through the provision of relief materials.

The governor said that apart from the provision of relief materials, the ultimate requirement of the displaced people was the provision of adequate security to enable them return to their homes.

“The IDPs’ main worry is to ensure that villages they have deserted is secured to enable them return.

“We have created about seven security bases, located across the clusters of IDPs in the state to provide security but the personnel to man these bases are grossly inadequate.”

He expressed his optimism that the visit would bring a lot of relief to the IDPs and facilitate the return of lasting peace to the affected communities.

The vice president also visited IDP camps at Kertyo and Agyaragu in the Obi Local Government Areas, where he assured government’s commitment to end the suffering of IDPs.