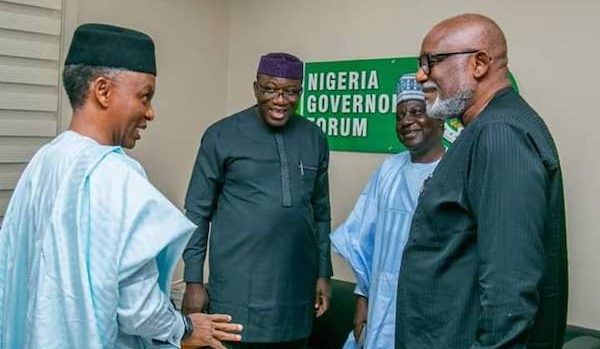 Nigerian governors have reportedly requested a further extension of the 30-year plan for the monthly repayment of the Federal Government’s budget support facility.

Minister of Finance, Zainab Ahmed, while briefing newsmen on Tuesday, revealed that the state governors were not satisfied with the revised N162m monthly repayment.

Ahmed who was speaking after the National Economic Council meeting presided over by Vice President Yemi Osinbajo, said the ministry reported to NEC on the status of the National Budget Support Loan Facility to States.

The finance minister said the stakeholders would meet again with a view to further reviewing the repayment conditions.

“The budget support facility was initially for a repayment period of 20 years; when we made the first deduction in September, the states had complained that the amount deducted from states, which was N252m, was too high.

“Since then, the Central Bank of Nigeria, which is the lender, had revised the conditions to make the payment longer; so the new repayment period is 30 years; so this means that states will be paying monthly, N162m.

“But again today, the states still were not satisfied with the conditions.

“So, we are expecting that the Federal Ministry of Finance, Budget and National Planning will engage the governors again with a view to having the CBN further revise the conditions to reduce the monthly repayment burden.’’